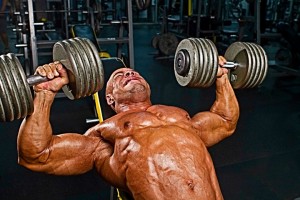 In general, overloading is the practice of applying a load greater than what a power-producing source is capable of withstanding. In machinery, this excessive burden can result in equipment failure. In the human body, this application results in adaptation to subsequently withstand even greater demands. When an athlete’s muscles are exposed to extreme tensions, an over compensation effect can occur. Fueled with proper rest and nutrition, bodybuilders routinely apply progressive overloads on their muscular systems to induce hypertrophy, or growth – to build their body.

Bodybuilding routines consist of several sets of exercise to induce a training stimulus that overloads a muscle’s functional capabilities. Within the structure of a multiple-set workout, there are five frequently used loading patterns: pyramids, inverted pyramids, double pyramids, flat pyramids and wave loading.

Pyramiding is the act of increasing a load over multiple sets, until a low-repetition maximum is applied. This is commonly the most comfortable way for beginner bodybuilders to get accustomed to weight training. This method allows a trainee to build up confidence, localize blood flow and focus efforts – prior to completing the final and heaviest set.

Pyramiding loads can be prolific for many – especially new trainees – but there is debate surrounding the use of pyramids in enhancing strength in experienced bodybuilders. Pyramiding up a load can create a lot of initial volume prior to the heaviest set; at a moment when the intensity of effort must reach its peak.

An inverted pyramiding scheme involves starting with a heavy load and then lightening the tension as the sets continue. Regular application of this method is not common practice today. It’s well understood that immediately starting a routine with a heavy load can result in injury, as well as less effective exercise execution. Prior to using heavy loads, an affected area must be properly warmed up and the movement should be rehearsed to focus efforts.

In advanced bodybuilding methods, an inverted pyramid is most often used with short rest intervals for an accumulative stress on the working muscle. Drop sets use an inverted pyramid structure with no rest intervals – a single set is extended using multiple sets back-to-back. When performing a drop set, a load is exercised until muscular failure and then immediately followed up with lighter loads. Running the rack is a term used when a trainee starts at the heaviest end of a dumbbell rack and continues to work toward the lighter side without rest. The loads decrease but they are continually performed to failure.

Double pyramids require an individual to perform a regular and inverted pyramid. The load and intensity is worked up, and then backed down again. New trainees can benefit from this loading pattern if their training is focused on building better motor control, skills that minimize shakiness as well as involvement from anatgonist and supporting muscles. On the other hand, many advanced bodybuilders avoid these extended pyramids since high levels of intensity and motivation are difficult to preserve over extended periods of time.

Many new strength athletes erroneously believe workout sets should increase to continue to build fitness levels. The reality is: too many working sets will decrease the value of the training session and lead to excessive strain on the body and mind. Soaring levels of stress and fatigue can lead to extreme decrements in performance – as well as injury. Additionally, failing to allow sufficient recovery between exhaustive sessions will lead to over reaching; eventually signs of overtraining syndrome manifest. Intensity and volume must be properly balanced to optimize a resistance training program. It takes experience to discover an ideal amount of sets for each muscle group. Furthermore, the perfect model can change with increases in muscular size and strength.

Flat pyramids use the same repetitions over multiple sets. Many high-volume routines employ flat pyramids over five to 10 sets. To balance volume and intensity, only the final sets are typically worked with extreme effort. This is often accomplished by creating an accumulative fatigue effect using restricted rest intervals under a starting sub-maximal load. The load gets more difficult as the sets continue.

Tudor Bompa, a well-known strength coach, recommends flat pyramids as the best option for developing maximum strength. In his book Periodization Training for Sports, he explains that the greatest neuromuscular adaptation will occur by avoiding confusing the body with multiple levels of intensity. In other words, a stronger mind-muscle connection is developed by using the same load, over multiple sets, with an accumulative fatigue effect on muscular systems.

Due to their greater neuromuscular efficiency, advanced bodybuilders should perform fewer repetitions than less experienced athletes. The athlete’s known capabilities will determine the appropriate amount of sets. Beginners learning proper exercise execution should use lighter loads than their more advanced counterparts, but generally more sets. An inability to train at optimal intensities, due to lack of experience, can be met with an increase in training volume.

Wave loading refers to an up-and-down change in load with every set. Two waves are typically performed with the heaviest loads applied on the final wave. This method can be helpful in rehabilitation scenarios; where an injury is creating discomfort during a movement. By wave loading, the associated joints are allowed to adequately warm up and become less resistant to training. Bodybuilders can benefit from wave loading when performing exercises known to cause discomfort, such as triceps extensions.

There are other miscellaneous loading patterns in resistance training but these are some of the most commonly used today. Always experiment and document to fine tune an optimal stimulus. Try different methods and use a training journal to ultimately determine a program’s effectiveness.