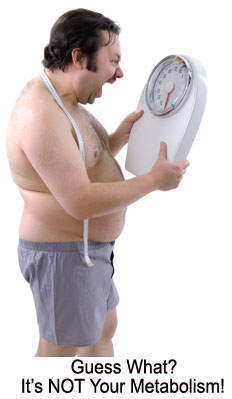 
QUESTION: Tom, we all know people who eat recklessly yet are very lean. My ex-husband seemed unable to put on ANY bodyfat whatsoever. At first I credited that to him being a very active athlete. But after spine surgery, he had to stay home for a year, did nothing but lay on the couch all day, play video games and eat his head off. He STILL didn’t gain a pound! I know more men like this than women, but I do know a few women who seem “blessed” with naturally slim figures, even though they don’t watch their diet or exercise.

On the other hand, we all know individuals who seem “cursed” and will tend to pack on weight even with a reasonable diet. So here is my question: those real life examples seem to strongly demonstrate a wide gap in metabolism between individuals. Do you accept and acknowledge that?

I strongly believe that I have a “slow metabolism” in the sense of needing very few calories to maintain my weight, hence the obligation of a very low calorie diet to achieve a deficit and lose weight. I’m more than willing to accept that as a mere belief (given a better explanation), rather than a biological fact, and replace it with a more positive thought. But please help me understand if I truly have a slow metabolism and need to work around it, or if I’ve got the whole concept wrong and need to re-frame completely? 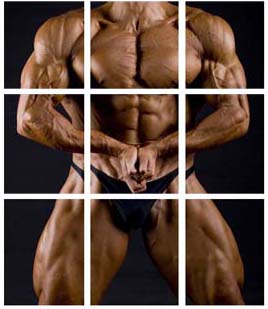 ANSWER: First, let me mention that people can eat “recklessly” in the sense that you see them eating “junk” food all the time and they don’t gain weight. That doesn’t seem fair and it’s a natural reaction to think they must have great genetics or a fast metabolism.

Many people have the idea stuck in their heads that junk food automatically turns into fat. That’s not the case. Excess calories cause weight gain, not specific foods per se. There are plenty of people out there who aren’t so strict with their food choices (food quality), but they don’t overeat (food quantity), so they stay slim, it’s that simple.

People will always be confused about this apparent paradox until they look at the big picture and get clear on the fact that weight loss is a calories in versus calories out equation.

With that said, yes there CAN be large differences in metabolism from person to person, and yes some people do need fewer calories to maintain their weight – especially women.

However, most people don’t understand what metabolism means, so they attribute the differences in calorie needs to genetics.

The truth is, the genetic (relative) differences in basal metabolism between any two individuals at the same body weight and body composition are very small.

What a “fast” or “high” metabolism really means is that someone burns a lot of calories every day – at rest (basal metabolic rate or BMR) and / or including ALL activity (total daily energy expenditure or TDEE). When you say you have a slow metabolism, all you are saying is that you aren’t burning very many calories.

Here’s what most people don’t realize about metabolism: We all have different energy needs, and those needs are influenced the most by body size (especially fat-free mass) and activity, not genetics.

The important thing to know is that the person with the higher calorie expenditure burns more calories primarily because he or she is larger, has more muscle and is more active, not from being “blessed” with a fast metabolism.

But what about genetics? Aren’t some people born with faster or slower metabolisms?

Yes. But… after you adjust for body weight/body size, the gap in Basal metabolic rate (what you could attribute to genetics) is usually very small. If two people are identical in body weight, lean body mass and activity level, they will usually have close to the same BMR and total calorie expenditure.

In some rare cases, there are small differences in BMR from person to person. Most research on this “inter-individual metabolic variance” says the difference is only 3-8%.

So…even though they have identical body weights and activity levels, two females could have differences like these:

Female B would be correct in saying she inheritied a slower metabolism, relatively speaking. But does this mean that her metabolism causes her to be fat or prevents her from losing weight? Nope – there’s only a slight difference in metabolism between the two women who are the same size.

If genetic differences in metabolism are so small, and a slow metabolism is not the problem, then why is it so darn hard for some people to lose weight?

Well, it involves a person’s entire lifestyle and all their behavior and habits put together and how that affects the energy balance equation. The complete answer fills a whole book, and is more complex than just calories in versus calories out, but it does start with that simple math equation.

Most people get the math equation wrong and they have no idea how to customize nutrition for their body type and activity level or how to properly troubleshoot slow fat loss.

Since most people are not consistent with their diet and they under report food intake, we can assume female B is probably eating an extra 200 or 300 calories a day that went unaccounted for (and that’s me being nice), so now she’s on target to lose only a half a pound a week, less than she wanted (almost barely noticeable to some, and could easily be masked by water weight gain, showing no loss on the scale).

At that rate, she might get really frustrated and start blaming her metabolism, not realizing that (1) a pound a week is reasonable progress for a woman her size, (2) she simply didn’t stick to her prescribed calorie allowance.

Furthermore, maybe she was only focused on diet and didn’t realize that she could add weight training and cardio and increase her calorie expenditure/metabolism by hundreds of calories that way.

Each individual is operating within their own unique calorie equation and must adjust calories and activity according to their needs, not someone else’s. Comparisons to others will only frustrate you, especially if females try to compare themselves to males (NOT a good comparison, because men are larger and have higher BMRs).

But aren’t there ways to increase your metabolism?

Yes, you can increase your metabolism, but you have to attack it from BOTH angles: nutrition and physical activity. If you try to do it with diet alone, your metabolism will usually get slower, not faster.

One way to increase metabolism is through weight training and increasing your lean body mass. However, you’d have to gain quite a bit of muscle for this to really make a difference in your resting metabolic rate. The weight training is crucial either way though. Weight does boost metabolism for a short time after each workout, it burns a lot of calories and you need the resistance traning just to prevent loss of lean body mass while you’re dieting.

Another way to increase your metabolism is to increase ALL your daily activity: In addition to the weight training, add some kind of cardio or metabolic training at least a few times per week. On top of that, all your daily walking, recreation, work and housechores adds up more than you’d imagine (it’s called non exercise activity thermogenesis or N.E.A.T.)

A third way to keep up your metabolism is diet. Extreme starvation diets will cause quick weight loss in the beginning, but can actually slow down your metabolism later on, so a conservative cut in calories is best. A higher protein diet is helpful because it protects lean body mass in a calorie deficit and has a higher thermogenic effect. There are some foods, such as hot peppers, or drinks such as green tea, which are reputed to be thermogenic. Unfortunately the effect is quite small, so don’t bother looking for “magic foods” or “magic pills.”

Last but not least, here’s the big metabolism myth that most people find hard to believe:

Research proves that overweight and obese people actually have a FASTER metabolism than lean people. How is that even possible? As mentioned above, larger body = higher calorie expenditure at rest and during exercise.

A lot of people don’t believe me when I tell them this, so I’ve posted a study below that scientifically confirms that overweight people have faster metabolisms than smaller, thinner people:

To test the hypothesis that total energy expenditure (TEE) and resting energy expenditure (REE) are low in extremely obese individuals, factors that could contribute to maintenance of excess weight, a cross-sectional study was conducted in 30 weight stable, extremely obese women [BMI (mean ± SEM) 48.9 ± 1.7 kg/m2]. TEE was measured over 14 d using the doubly labeled water method, REE and the thermic effect of feeding (TEF) were measured using indirect calorimetry, and activity energy expenditure (AEE) was calculated as TEE — (REE + TEF). Body composition was determined using a 3-compartment model. Subjects were divided into tertiles of BMI (37.5–45.0; 45.1–52.0; and 52.1–77.0 kg/m2) for data analysis. TEE and REE increased with increasing BMI tertile: TEE, 12.80 ± 0.5, 14.67 ± 0.5, and 16.10 ± 0.9 MJ/d (P < 0.01); REE, 7.87 ± 0.2, 8.78 ± 0.3, and 9.94 ± 0.6 MJ/d (P < 0.001), and these values were 29--38% higher than published means of measured TEE in nonobese individuals. No significant differences were observed among BMI tertiles for AEE, TEF, or physical activity level (PAL = TEE/REE, overall mean 1.64 ± 0.16). The Harris-Benedict and WHO equations provided the closest estimates of REE (within 3%), whereas the obese-specific equations of Ireton-Jones overpredicted (40%) and Bernstein under-predicted (21%) REE. Extremely obese individuals have high absolute values for TEE and REE, indicating that excess energy intake contributes to the maintenance of excess weight. Standard equations developed for non-obese populations provided the most accurate estimates of REE for the obese individuals studied here. REE was not accurately predicted by equations developed in obese populations. The good news is: If you're overweight, you have a higher calorie expenditure and it will actually be easier to achieve a sizeable calorie deficit. And now that you understand the metabolic math, you're empowered to get the results you want: All you have to do is customize your program and pin down the right amount of calories for your body type... your body size... and your activity level, and the fat always comes off. Don't try to follow a generic, one-size fits all program for your sake, don't compare yourself to others. You can learn more about legitimate strategies for preventing your metabolism from slowing down while dieting (chapter 2), how to troubleshoot progress plateaus (chapter 4), how to pinpoint your exact personal calorie needs (chapter 6) how to maximize your metabolism and maintain your lean muscle tissue with protein (chapter 10) and a lot more in my fat loss manual: Burn the Fat, Feed the Muscle. Burn The Fat, Feed the Muscle is the most detailed, one-stop guide to fat burning nutrition you’ll ever find.
That’s why so many people call it the fat loss bible.