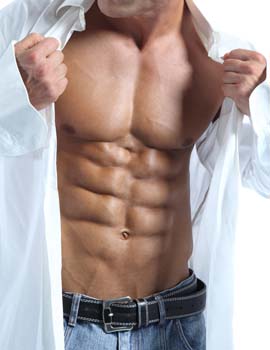 by Tom Venuto ~ Burn the Fat, Feed the Muscle

Being “ripped” is the coveted condition where your body fat is so low that muscular details never seen on “average people” start standing out in bold relief:

Quite simply, a “ripped” person is like a walking anatomy chart.

Few people ever achieve ripped condition, so when someone does get ripped, it gets attention and commands respect.

A ripped physique stands out in any crowd – even a fit crowd, because there’s lean and then there’s beyond lean… the place called RIPPED!

Most Burn The Fat readers already know what ripped means, because that word is part of bodybuilding vernacular and with the boom of fitness advertising into the mainstream (as in “get ripped abs!”), ripped has become a household word.

But few people know about the deeper intricacies and significance of being ripped, and almost no one knows HOW to get ripped, and that’s exactly what you’re about to read…

The average American today is not only NOT lean, they are actually not even average. The “average” American is overweight – not a normal or ideal body fat level.

As of 2010, the official statistics say 68% of Americans are overweight (at least slightly over their “ideal” weight and up to 30 pounds over their ideal weight). Thirty percent (30%) are obese.

Don’t laugh at us, our international friends, because this epidemic is spreading to almost every corner of the globe, even Asia. Just add Westernization.

A few years ago I met a Chinese Gentleman at a seminar in Orlando and he was telling me that when Pizza Hut first opened in China, the line to get in went all the way around the block. He had never seen anything like it. Just this year, large fast food corporations have reported intensifying their push into China to make up for slower fast food sales in the States.

Which means, a truly ripped person is a rare sight and getting ripped is a remarkable achievement.

People who think being ripped is not rare and remarkable are probably immersed in bodybuilding, fitness or physique culture, so they see it more often. The truth is, go out in the “real world” – go to Disneyland, go to the mall, go to WAL-MART, go to a tourist resort, walk down a boardwalk, and take a look around…

Go anywhere in public where the masses congregate, open your eyes, look around and ask, “How many people here are lean, muscular and defined?” Answer: scant few and that’s exactly why we all gasp in amazement whenever we see ripped abs…

Even when an actor – who is expected to be attractive and fit – appears ripped on screen, it’s a big deal.

When an actor who had a “fit but normal” body suddenly gets ripped for a role, he becomes the talk of the town. Even the fitness magazines start writing about the celebrity workout or diet that produced such a mind-blowing condition and the paparazzi follows them to the beach.

To this day, people are still talking about Linda Hamilton’s Terminator 2 “Ripped arms” and “ripped abs” like Brad Pitt in Fight Club.

Heavyweight bodybuilders are known for being ripped AND huge. But if your body fat is low enough, all you need is a normal or slightly above normal amount of lean body mass, and your physique looks stunning.

If you’re ripped, you don’t need huge muscles to look spectacular. And if you DO want to look bigger, getting ripped can create an optical illusion of more muscle size than you really have, at least in men.

Brad Pitt was not the least bit bulky, but his ripped condition made his modest muscle size look 10X more impressive. Bruce Lee was not a big man – his biographies put him at as light as 145 pounds and never over 165. But when your muscles are proportioned and you’re as ripped as Lee was in films like Enter The Dragon, your body becomes the stuff of legends.

I wonder how many people taped up a Bruce lee poster when they were kids – or still have it on their gym walls today as adults? Stallone in Rocky IV or Rambo II? It wasn’t huge muscle bulk and body weight that made these physiques legendary – it was being ripped!

Sly told Muscle and Fitness magazine that for Rocky III he weighed only 165, and in Rocky IV where he his muscles looked even larger, he was still only 173 lbs.

Like I said, being ripped creates a stunning optical effect even without a bodybuilder’s mass, and those who are ripped often don’t care about their (light) bodyweight – they’re after “THAT LOOK.”

Unlike larger bodybuilders, sometimes the ripped man flies under the radar, fitting perfectly in a nice suit, looking like a normal dude, but when the shirt and jacket come off…

Maybe that’s part of the appeal – no one suspects such a physique is under there until the “big reveal.” The look on a girl’s face when you’re a ripped man who takes his shirt off in front of her for the first time and she had no idea what was underneath… priceless!

Here’s another reason getting ripped is such an amazing achievement: The leaner you get, the harder it is to keep getting leaner. Losing fat can be a challenge at any stage, but going from already lean to ripped is NOT easy, especially if you don’t understand bodybuilding and physique athlete nutrition techniques.

You’ve surely heard about, if you haven’t experienced personally, “the last 10-15 pounds.” Those final pounds can be a bear to burn. That’s no urban legend, it’s true for a variety of biological reasons, which I’ve discussed many times in my articles, blogs and fat loss books.

Some overweight or obese individuals complain that it’s harder for them to drop fat. But the fact is, it is easier for a heavy person to create a calorie deficit than a lean person.

I don’t mean to dismiss the achievement of a heavy person dropping a lot of weight, not at all, I’m only saying that the first 10 pounds are almost always much easier to take off than the last 10…

… and burning off those last pounds is what reveals a truly ripped body – yes, even the last FIVE pounds can blur your muscle definition and explain why you don’t have that razor-sharp six pack yet.

The Tell-Tale Signs Of A Ripped Body

How do you know ripped when you see it? Well, a very low body fat level is the key. It’s not about doing a certain exercise or workout program. NO training program can make you look more ripped if your body fat stays the same.

Let me say it again: VERY LOW BODY FAT IS THE KEY TO THE RIPPED APPEARANCE. Learn how to reduce body fat, and you’ve learned the secret to getting ripped.

What’s more responsible for low body fat level than any other factor: Nutrition! Not even the trainers dispute that. It’s a fact. That’s also why 75% of my fat-burning program, Burn the Fat, Feed the Muscle is focused on nutrition techniques for losing your body fat.

How low does your body fat have to go? It must be very very low, but ripped is not a number, it’s a look. You see it instantly. The physique just POPS everywhere and DEMANDS your attention.

As you look closer you can always tell when someone is ripped: Their skin looks almost transparent – it appears to lay on top of the muscle like a thin sheet of cellophane wrap. (In bodybuilding, they often say a competitor is “shrink-wrapped.” If you ever heard that before and were confused, now you know what they meant!)

And of course there’s vascularity – the veins. Body fat gets stored on top of both the muscles and the veins, so the leaner you get, the more vascularity is revealed. Too much is usually considered un-aesthetic, especially in women, but up to a point, veins add to the ripped look.

Men get more vascular than women (and a lot of guys like it), but even women see it subtly in lower abs, arms and sometimes the deltoid area when they get really lean… and of course, there’s that Arnold-in-Pumping-Iron bicep vein, the trademark of a well-developed AND ripped arm.

If it’s so rare to get ripped and if it’s so difficult to achieve, you might be thinking that you’ll never get even close to getting lean enough to look ripped.

That’s mistake number one: Not believing it’s possible for you.

I’m not going to BS you – it takes dedication and a lot of hard work to get ultra low body fat. If it were easy, everyone would be ripped. Like Art Williams said, “I’m not telling you it’s easy, I’m telling you it’s worth it.”

But if you’re willing to work hard at it, almost ANYONE can peak their physique and get ripped. I’ve been teaching people how to do it for more than 20 years – regular people, NOT just bodybuilders or models – and my system always works when it’s followed.

New fangled “miracle” diets come and go every year and almost all of them fail – and they fail horrifically on those last 10 pounds of resistant fat. Heck, any old diet will take off the first 10 or even 20 pounds, but almost none of them get you all the way to ripped. It happens to almost everybody – the diet works at first, but stops working before you get all the way there.

And as I mentioned before, workout programs that claim to get you ripped are useless without the proper nutrition.

The single most effective fat burning system that stands the test of time for getting ripped is bodybuilding and physique athlete nutrition. It’s the same system competitive bodybuilders and figure athletes use… it’s the same program I’ve written out in my ebook, Burn the Fat, Feed the Muscle… and it’s the same type of nutrition program I’ve been teaching to my “real people” coaching clients for decades…

If getting very lean or even Ripped is your ultimate goal, you need a program that will take you ALL THE WAY there, not leave you hanging with the stubborn 10 pounds. Bodybuilding nutrition programs like Burn the Fat, Feed the Muscle are IT. For ultimate leanness, they have always worked and always will.

Mark my words, you will see bodybuilding and physique athlete nutrition making a massive comeback in the year ahead as more and more people are getting fed up with being shortchanged by all the worthless new diet fads that have come and gone in the last 10 years. It’s all coming around full circle.. right back to basics.