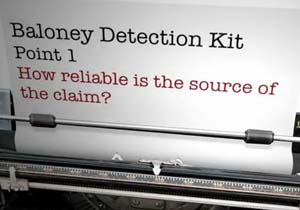 by Tom Venuto
Fat loss and fitness fads, frauds, fakes and downright weird stuff is everywhere in the marketplace today. Collectively, we’ll call it baloney and it includes all the programs and products that have no evidence supporting their claims. Baloney is a big problem because it adds to the already overwhelming information overload. It could also be costing you a fortune. Millions of people get scammed every year and their sense of frustration builds with each regretted purchase and every failed attempt. Fortunately, there’s a solution…

Why does baloney keep proliferating?

If there’s no science behind all this baloney, then how do fitness and weight loss companies keep getting away with selling it and why do so many people keep buying it? The Federal Trade Commission (FTC) in the United States and watchdog organizations in other countries do their best to monitor and prosecute fraud, but it’s so rampant, they can’t even put a dent in it. In fact, they can’t even keep up with it.

With the nature of internet marketing today, a company can swoop in and do a massive new product launch promotion or pay per click advertising campaign and then disappear like a shadow in the night. The alphabet agencies never even catch a whiff of it.

The baloney-meisters know that most consumers don’t investigate before they invest – they buy on impulse and emotion, especially with deadline driven sales and special offers. Advertisers know how to hit your emotional hot buttons and where there’s demand, there will always be supply.

How to protect yourself against fitness and fat loss baloney

If you want to avoid being a victim of the next fitness fraud or the latest diet deception and start getting better results, the best defense is a good baloney detector.

In his brilliant book on the virtues of science, The Demon Haunted World, Carl Sagan devoted an entire chapter to the art of “baloney detection.” It’s a set of skills you can learn and hone over time, which includes understanding the scientific method, developing critical thinking skills and viewing claims with a good dose of healthy skepticism.

If you have any interest in science, Sagan’s book is worth reading. I’ve written a brief summary below and also posted an excellent video from Michael Shermer.

Am I suggesting that you become a closed minded skeptic? Not at all. In fact, I believe that some of the most die-hard skeptics develop their own “blind spots” as a result of staking their entire reputation and identity on skepticism.

I’m simply saying that if it sounds too good to be true, run it through the gauntlet of the baloney detector and see if it passes.

One last thing – and this is important – some baloney actually works, but it’s all in the mind … the placebo effect is very real.

“If we don’t practice the tough habits of thought, we cannot hope to solve the truly serious problems that face us, and we risk becoming a nation of suckers, a world of suckers, up for grabs by the next charlatan who saunters along.” – Carl Sagan