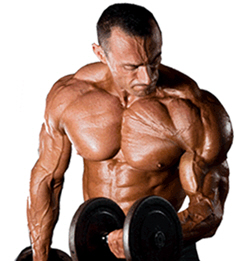 People engaged in resistance training programs often seek out exercise machines that isolate individual muscles. While the intention is usually to train more effectively or safely, committed bodybuilders must resist a natural human urge to travel the easiest route. This instinctual reaction helped prehistoric populations survive during widespread periods of famine. However, procuring food is far less of a concern in modern societies and taking easy routes often leads to embracing nothing more than complete laziness. Today, we exist in a world surrounded by automation – technology set on minimizing physical exertion from daily existence. Societies have replaced hunting and gathering provisions with fast-food restaurants and quick-stop markets. Community activities are becoming exceedingly rare; exchanged for convenient Internet-hosted real-time chat rooms, topic-based forums and robust e-mail systems. In line with their genetic programming to limit energy output, modern man is accustomed to seeking out mechanical assistance at all cost.

When an elevator door is jammed, how many people quickly run up a stairway? Many people would sit and complain – even though embracing a more progressive path could save a lot of time. Think about how this broken elevator analogy applies to a resistance training program. How many trainees continue to hop on fitness machines to repeat the same isolated movements, over and over, utterly unwilling to undertake the onslaught of heavy compound lifts? Genetically superior bodybuilders aside, those who choose to forgo more demanding training will fail to realize their true bodybuilding potential. Pounding out 20-rep sets of intense barbell squats, called “widow makers” in hardcore training circles, causes a trainee to drip with sweat while holding back during a nauseating condition. It hurts… for a moment, it sucks! But to push past current fitness thresholds and force muscle hypertrophy to decent levels, a trainee must exceed what is already known to be possible. To do that effectively and safely, training must remain functional while becoming exceedingly more demanding. This causes the greatest overcompensation effect to occur with adequate rest and nutrition.

“How can I better isolate my triceps” is a question often thrown around by beginner or stagnant bodybuilders. “How do I target the lower-inner part of the pectoralis major, outlining the sternal head?” The erroneous nature of such personal nitpicking is only made more tragic after hearing: “I don’t want to bench press; it’s dangerous and doesn’t ‘feel’ right.” The main problem with this ideology: our complex skeletal and muscular systems aren’t assembled to work in isolation. The human body is a powerful entity, capable of pushing and pulling heavy loads. It naturally and instinctively functions as a series of units working together. Training it as individual parts is akin to driving a car to the store by rotating one wheel at a time. Good luck with that!

Trying to build elite levels of muscle mass through isolation training will pave the way to aches, pains and excess body fat. Performing seated triceps extensions on a machine, day-in and day-out, will never build the muscle mass obtained through consistent and progressive free-weight dips or close-grip presses. These free-weight variants promote stronger neuromuscular coordination for more intense training, better muscle memory for long term results and core stabilization for superior control through various planes of movement. Getting lean and muscular, while avoiding injuries, requires a functional body that works as a complete and powerful unit while performing complex movements.

Greatly contrasting the benefits of functional training, isolation movements use a limited range of motion though an artificial plane of movement. Often the mechanical apparatuses assist in concentric and eccentric muscle activation – tossing out the natural resistance experienced by pushing or pulling a load freely against gravity. Isolation movements are limited in providing any real-world benefit.

Men and women who require superior physical readiness for moments when lives are on the line are good sources for productive fitness programs – such as firefighters, police officers and the Armed Forces special operations troops. And guess what? Functional training methods are a growing trend among these populations. CrossFit is one of them. At Fort Hood, Texas, LUMBERJACK CrossFit has quickly swelled from a small workout team to over 750 participating soldiers.

Holistic training programs, like CrossFit, use functional lifts versus stationary single-joint machines. They are effective since they create a way to define current fitness abilities and motivate participants toward exceeding them in a functional fashion. The programs develop greater physical competence by training cardio respiratory endurance, stamina, strength, intensity, speed, flexibility, agility, accuracy and balance. This level of fitness is reached by accomplishing major compound, multiple-joint functional lifts; such as dead lifts, squats, presses, clean and jerks and snatches. In addition, mastering the basics of gymnastics is required to properly execute pull-ups, push-ups, sit-ups, dips, rope climbing, handstand presses and various bodyweight holds.

The training is further rounded out by introducing endurance-orientated events, such as cycling, running, swimming, rowing and competitive sports. However, bodybuilders must respect training specificity as a well-established principle for success. Excessive endurance training stresses aerobic energy pathways and creates physiological responses that conflict with muscle growth. Commitments must center on high-intensity resistance exercise that recruits explosive anaerobic energy systems.

Machines have an occasional place in bodybuilding programs, mostly during periods requiring general tension or depletion training, but heavy compound movements and functional training should make up the bulk of any progressive resistance training program.