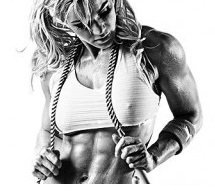 With the barrage of OTC anabolics flooding the marketplace in recent years, it can be difficult to keep up on all the new data, but more so, we may end up overlooking some valuable applications these products have to offer in the process. In this article, I will explore how one of our most potent OTC designer steroids may also serve as one of the safest AAS for women looking to avoid androgenic side effects.

The steroid in question is Methasteron, which today is most commonly referred to as “SD” (short for Superdrol). This steroid was first synthesized by Syntex in 1956, and in conjunction with the anti-tumor research of the day. It was later elaborated on in 1959, at which point its anti-tumor properties were verified and it was defined as a “potent orally active anabolic exhibiting only weak androgenic activity”. Subsequently, research on Methasteron was discontinued and it did not resurface again until 2005, when it was brought to the OTC market by Anabolic Xtreme and given the name “Superdrol”.

Since then, Superdrol has been at risk of being removed from the marketplace on more than one occasion, with Anabolic Xtreme being the 1st company to cease production after receiving government warnings to take their product off the store shelves. However, this has not stopped numerous supplement companies from wanting to cash in on the action and over the years we have seen dozens of clones enter the market under various names.

Even today, 6 years after first being released, Superdrol remains as popular as ever, likely accounting for more sales than any other single OTC anabolic. Over this time SD has gained a solid reputation for being an exceptionally potent steroid at inducing rapid gains in size & strength, and rightfully so. In addition, this drug has also gained reputation as being a rather “harsh” steroid, which stems from the fact that it is a methylated compound known to result in unpleasant, although transient, side effects in some users. Combined, these 2 characteristic have contributed to the belief that SD is therefore inappropriate for female users wishing to avoid androgenic side effects and is better off left for the men. However, upon further inspection it will be revealed that not only is SD unworthy of this criticism, but it is actually one of the least likely steroids to cause androgenic side effects in female users, per effective dose. Additionally, when evaluating SD’s androgenic potency relative to its myotropic ability (muscle-building), it is shown that it exceeds that of all other steroids typically employed by females, including Anavar, Epistane, Primobolan, and Nandrolone. This alone makes SD a formidable steroid in a woman’s arsenal, but rather than take my word for it, let’s look at what the science has to say.

SD is a Dimethylated form of Masteron and an extremely potent anabolic. In fact, SD is so potent that even its weaker cousin, Dimethazine, has been shown in the literature to effectuate larger increases in muscle tissue, per mg, than even our most potent traditional steroids, such as Anadrol, Dianabol, and Testosterone. With that said, there are a few factors we need to look at when determining which steroids are the most effective at building muscle tissue while minimizing masculinizing side effects.

In referencing Vida’s “Androgens and Anabolic Agents”, we see that SD is assigned a Q-Ratio of 20. A steroid’s Q-Ratio simply refers to its anabolic potency relative to its androgenic potency, which is determined through assessing a steroid’s anabolic-androgenic ratio. As a base of reference, Testosterone has an anabolic-androgenic ratio of 100:100, being equal parts androgen and anabolic. In the case of SD, it has a ratio is 400:20. With SD’s anabolic rating sitting at 400 and its androgenic rating at 20, SD is 20X more anabolic than it is androgenic. In comparison, the steroid Anavar, which is regularly utilized by women wishing to avoid masculinization, maintains a Q-ratio of roughly 20-30 (depending on what number is used as a reference). 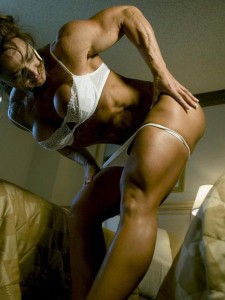 A 2nd factor used in determining a steroid’s suitability for women is the drug’s myotropic (muscle-building) strength per mg, as this will tell us how much or how little of a particular steroid one must use in order to generate a specific increase in muscle size relative to another steroid. While a steroid’s anabolic rating is useful, it tells us only part of the story, as it is not always indicative of its true muscle building potential. In other words, a steroid with an anabolic rating of 200 might exceed the muscle building capacity of a steroid with an anabolic rating of 400. As an example, the steroid Dimethazine outperforms Anavar in terms of myotropic ability, despite Dimethazine having an anabolic rating roughly 75% lower than Anavar. Fortunately, when it comes to SD, we are left with a steroid which demonstrates muscle-building potential beyond what its anabolic rating implies. This is advantageous for women wishing to avoid masculinization, as a lesser amount of the drug needs to be used in order to see a significant hypertrophic effect, compared to steroids exhibiting weaker myotropic ability.

Let’s look at some real-world experience for a minute. I will make my point by comparing SD to Anavar, which is FBB’ings most popular steroid for those interested in avoiding androgenic side effects. The typical starting dose for Anavar is between 5-10 mg/day. While most females will experience considerable progress as 1st time users at that dosing amount, there is no denying that several other oral AAS exceed Anavar’s muscle-building potential at an equal dose. With this being the case, would it not be advantageous if we had at our disposal another steroid which supplied an equal or lesser androgenic effect, while surpassing Anavar’s muscle-building potential at the same time? Of course it would and in reality, we do. It’s called SD.

In briefly referring back to the androgenic ratings of these 2 drugs, you will recall that SD has an androgenic rating of 40 (40% as androgenic as testosterone per mg), while Anavar’s is around 25 (25% as androgenic as testosterone per mg). That is only a 15 point discrepancy. 10 mg of Anavar will supply the androgenic equivalent of 2.5 mg of testosterone, while 5 mg of SD will provide the androgenic equivalent of only 2 mg of testosterone. Obviously, 5 mg of SD supplies a weaker androgenic effect than 10 mg of Anavar and therefore a reduced likelihood of experiencing masculinization, so the final question which needs to be asked is “How does 5 mg of SD compare to 10 mg of Anavar in terms of muscle building potential?” The answer: It’s not even close. SD is one of the most potent muscle-builders worldwide. Very few steroids sold today, whether on the black-market, prescription, or OTC, surpass this drug’s ability to add muscle tissue per effective dose. In contrast, Anavar is known as one of the weakest steroids when it comes to muscle growth. In terms of real-world results, SD kicks its ass all over the place, as it does to almost all other steroids.

My dosing recommendations for 1st time users and/or those wishing to minimize masculinization is 2.5-5.0 mg/day. Below I provide an androgenic reference chart, so that females at more advanced levels can make informed decisions regarding their use.

Lastly, this entire conversation would be rendered near useless if we did not address the topic of hair-loss, as this is typically one of the primary areas of concern for most women wishing to avoid masculinization. Because a steroid’s androgenic rating does not always correlate with its propensity to initiate hair-loss, we must evaluate each steroid individually when determining how likely it is to affect the user in this respect. It should also be noted that the overwhelming majority of anecdotal evidence has been obtained from men.

In the real-world, user experience has shown SD to be a very mild steroid on the hair line, although hair-loss remains a possibility with any steroid. Only a very small minority of people report hair-loss with this drug and when taking into consideration how it fares against other commonly used AAS, I would tend to define it as one of the “least likely” steroids to cause this effect.
I strongly advise that females not familiar with this drug take the time to research it more thoroughly prior to use. This article was not intended to serve as a “profile” for SD, but rather, to help serve as an educational piece regarding this drug’s propensity to cause masculinizing side effects at effective doses and how it applies to females.

Newer Post
Honey and cinnamon cures – do they really work? Here’s what you need to know
Older Post
Anadrol ~ “The Classic Mass-Builder”