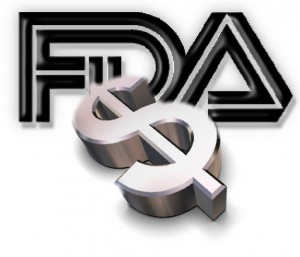 Tell your Representative and Senators the FDA should not view your supplements the same way they view synthetic food preservatives!

The FDA proposes that new dietary supplement ingredients should adhere to aggressive safety margins, which are typically reserved for chemical compounds known to be dangerous in all but the most miniscule concentrations.

Since food additives or preservatives such as aspartame, monosodium glutamate, and sodium nitrate are known to cause cancer or other severe health problems, the FDA has implemented safety guidelines which limit allowable concentrations of these food additives to levels that are supposed to be physiologically inert.

The fact that the FDA is trying to impose the same limits upon dietary supplements seems to be arbitrary and completely unfounded. In fact, when someone takes a dietary supplement, their intent is to positively affect the structure or function of their bodies in some way — limiting dosages of dietary supplements to physiologically inert levels defeats the entire purpose of supplementation with health-sustaining nutrients.

The FDA’s new guidelines are so flawed that even nutrients shown to be completely safe in hundreds of human clinical studies would fail to accommodate the unreasonable safety margins.

To give you an example, each manufacturer of certain fish oils would have to conduct a one year study where animals would have to consume the human equivalent of 240,000 milligrams each day of fish oil. Note the typical dose of EPA/DHA people take each day is around 2,400 mg — 100 times less than what the FDA proposes must be tested.

Another option under the FDA’s proposed mandates is to conduct a 90-day, 1,000-fold safety margin study in which two species of animals — one being non-rodent, likely young beagle dogs — will theoretically consume the equivalent of 2.4 million milligrams of fish oil daily. We know of virtually no species that can tolerate this high dose, so by default, FDA guidelines will make it impossible for certain omega-3 supplements to be sold.

Since these are not patented drugs, no supplement maker will be able to afford these “safety” studies, which means that many of the nutrients you now purchase at low prices will convert into high-priced drugs.
Pharmaceutical industry profit threatened by low cost supplements

It appears that the FDA is claiming that dietary supplements are unsafe, and in order to “protect consumers” the agency must place a stranglehold on the dietary supplement industry by requesting exorbitant safety testing. These ludicrous safety thresholds are in excess of those required by pharmaceutical drugs despite studies showing supplements are far safer than drugs.

According to the 2001 report of the American Association of Poison Control Centers (AAPCC), of the substances implicated in fatal poisonings in 2001, 84.6% were pharmaceutical drugs, with analgesics being implicated as the primary cause of death in 32% of fatalities or 341 deaths. This compares with 0.8% for all dietary supplements combined, even including substances such as dinitrophenol, a dangerous (and illegal) substance banned in 1938, as well as the central nervous system stimulant Ma Huang (Ephedra). Interestingly,the anti-asthma drug theophylline alone was responsible for 15 deaths, 66% more than all the available dietary supplements combined. {Reference: 2001 Annual Report of the American Association of Poison control Centers Toxic Exposure Surveillance System, Amer. J Emerg Med, 20, 391, 2002.}

A review of 2009 information for adverse events reported to the national control center’s data system shows that:

In total, 41 major adverse events were reported for the entire spectrum of supplements including botanicals, amino acids, and vitamins, and one death.

In contrast, more than 7,000 major adverse events were reported for pharmaceutical drugs, including a total of 496 deaths. And based on previous studies, we know the overall death rate for physician prescribed drugs to be far higher.

So there is no rational basis for the FDA to insist that dietary supplements that have been safely used in large populations as early as 1994 should be removed from the market and forced to undergo costly animal testing at absurdly high doses before they can be sold again.

There is, however, a huge economic benefit for the pharmaceutical industry if the proposed guidelines are enforced by the FDA. Health-conscious Americans who properly supplement slash their risk of degenerative disease. The FDA’s new rules, if enacted, will force the price of many supplements to surge upwards, while outlawing many effective ones altogether. That means that more aging people will have to rely on side effect-laden prescription drugs to treat the degenerative diseases they will contract because they will be denied access to health-promoting nutrients.

Participate in a groundswell to stop this impending carnage. Call your Representative and your two Senators.

As a citizen, you have the constitutional right to petition the government to redress your grievances. In this case, FDA proposals pose a direct threat to your health and longevity.

It’s time to take extraordinary measures to defend your right to continue using supplements your very life depends on … and to gain access to new natural ingredients that demonstrate efficacy in scientific studies.