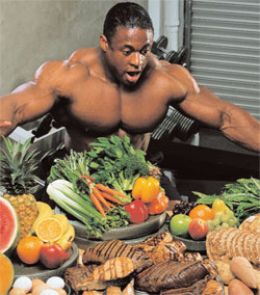 Now, I know what you’re thinking. “Going out for coffee” must be some clever euphemism we use for sex. After all, what kind of high Testosterone weight lifter sits around all day drinking coffee when he could be doing the “wild thing” with said hotties? But alas, rather than slowing his testicular production of the male hormone, my buddy assures me these “coffee dates” are components critical to his style of dating—and his success. Intrigued, I decided to give the coffee date a try.

The Origin of Obesity?

So there I am, sitting in my favorite coffee shop across from my “coffee friend.” Things are off to a good start. We’re laughing, she’s playing with her hair, and she’s reaching across the table touching my arm when I make a particularly witty comment. Note to self: “I’m in there!”

I order a green tea, a pitcher of water, and two chicken breast sandwiches (no bread, no mayonnaise, double the vegetables, please). Because it’s my “free” or “cheat” day, I pre-order dessert— a slice of warm apple pie. With mouth agape and that “where do you put it all?” look on her face, my coffee friend orders a chocolate brownie and a double latté. Then it happens: she starts asking the nutrition questions.

Internally, I groan. Only fifteen minutes into the meeting and we’re talking about the subject I usually like to steer clear of when I’m off the clock, especially with new people. It’s better to slowly wean them onto my diet ideas than to launch right into it during the first meeting. Damn my buddy and his “coffee dates”!

But then, during the ensuing conversation, which wasn’t as bad as I’d initially predicted, something else happened. In talking nutrition with my coffee friend, I realized that during this meal I was getting a very clear insight into the very “obesification” of North America.

Now, this girl is definitely not obese. She’s young, thin, and a real hottie. But in ten or twenty years, she will be obese if she continues to regularly dine on rich chocolate brownies and frappaccinos for lunch, bagels and coffee for breakfast (her admitted breakfast of choice), soda throughout the day, and leftover casserole for dinner.

Of course, obesity isn’t imminent in her case. She’s a young, intelligent, and reasonably disciplined woman, and she’ll probably be able to restrain her eating habits (i.e., curtail her total daily energy intake) enough to stave off full-blown obesity. But the fact is, simply moderating ones portions isn’t enough to achieve optimal body composition and health.

At this point some of you might be thinking, “Hold on just a minute, JB, didn’t you order the apple pie? Why are you railing against her when you’re just as guilty of ordering junk as she is?” Sorry, that sort of thinking is flawed.

Sure, I did indulge in a slice of sugar-laden junk food, this being one of the two “treats” I ate that week. But looking only at the junk food that we ate presents a woefully incomplete part of the picture. The presence of bad food in both of our diets is much less important than the absence of good food in hers.

To elaborate: I ate a small amount of junk food in addition to my antioxidant rich, protein filled, nutrient dense meal, which was just one of seven such meals I ate that day—and that was one of seven such days that week! She ate some junk. Period.

She started her day with junk, ate a lunch of junk, and filled the rest of the day with junk as well. I got all the antioxidants, micronutrients, and protein I needed, while she spent the entire day eating the nutritional equivalent of a cardboard box.

Based on our activity levels and basal metabolic needs, we both probably met our energy needs for the day (in terms of total energy ingested vs. total energy expended), but I actually got some nutrition that day. She just got calories, and her calories came from what we call “displacing foods.”

You see, the bagel, the brownie and latte, the soda, etc. were consumed instead of good healthy choices. So, in essence, their empty calories displaced the good, nutrient dense food she could’ve otherwise eaten. She consumed nothing but empty calories, calories more likely to be stored as fat than burned, calories that actually degrade health or do nothing to improve it, calories that’ll make her hungry and food-obsessed all day, and calories that’ll make her tired just an hour or two after consumption.
I ate 49 healthy meals plus two treats that week. She had all treats. Big difference, huh?

Know anyone else like this girl? Chances are you know lots of other individuals like her! In the US alone, there are about 129.6 million overweight individuals and probably many more well on their way, just like my coffee friend. These stats beg the question—how did otherwise intelligent people get to be so bad, exchanging good nutrition for empty calories? While an explanation is probably multifactorial, there are a few simple answers that pop into my mind.

First, I think that North Americans strive daily for nutritional convenience. Sure, when the typical person goes out for a nice dinner at a restaurant, he or she usually gets a decent meal. But, unlike many Europeans (the French and the Italians come to mind), North Americans select everyday meals for speed and convenience.

A nice egg and spinach omelet with oats and pineapple on the side takes some time to prepare and eat. On the contrary, a bagel and coffee can be carried into the car and eaten on the way to work. So in our quest for speed and convenience, we get very little in the way of good nutrition. That’s why we’re overfed and undernourished, and that’s how people can eat so much yet still have nutrient deficiencies.

Secondly, I think we’ve gotten too calorie conscious. Most people who make poor food selections aren’t stupid. They know if they want to be thin, they can only eat a certain amount of calories per day. If they eat more, they either feel monumentally guilty or, much less often, they head to the gym for marathon cardio sessions designed to exercise those extra calories off.

In trying to walk that thin tight rope of energy balance, they realize if they eat good, healthy food (i.e. marinated chicken breast with a spinach salad and a piece of fruit), they’ll be eating a bunch of calories which simply don’t taste as good as the brownies they’re craving. In this sense, the healthy food will displace the tasty junk they often crave.

So in an attempt to get the tasty brownie calories, they choose instead to displace the good chicken and spinach calories, kicking them out of the diet. In their minds, “a calorie is a calorie” and therefore if they simply eat a brownie instead of the chicken, they’ll stay just as thin. Thin, in our society, is synonymous with healthy. Little do they realize they’re setting themselves up for losses in lean body mass, an ever slowing metabolic rate, micronutrient deficiencies, and all sorts of nutrition related health problems including diabetes, cardiovascular disease, and syndrome-x (basically insulin resistance).

It’s hard to stay lean when the metabolism is dwindling as a result of insufficient protein intake and a low thermic effect of feeding. The metabolic rate takes another plunge because of deficiencies in essential fatty acids, not to mention decreasing muscle mass.

It’s also pretty difficult to stay lean if you’ve got diabetes, cardiovascular disease, and/or syndrome-x. To support this notion, all we need to realize is that in the last twenty years the incidence of obesity has doubled, yet our average daily energy intake hasn’t increased much at all!

North Americans aren’t getting so darned fat and/or unhealthy simply because of overeating. Often they replace good foods with the super-sized sugars, the trans fats, and the other nasty fast food ingredients. The good foods have the power to negate the effects of these nasty, health-degrading junk foods, but because people become too concerned with energy balance, they simply displace the good stuff.

In fact, if people simply ate a high protein, antioxidant and micronutrient rich diet supplemented with junk food, they’d end up leaner and healthier than those who got the same amount of calories (and often even fewer calories) from empty, displacing foods.

People often ask me what I think about cheat meals. Generally, what they want to know is, “Do I really have to eat clean all the time?” The answer is a qualified “yes.” You should plan out your diet in advance, choosing only clean foods, and then eat everything on your plan. One or two days a week, if you so desire, you can eat foods that wouldn’t normally be found on your plan in addition to and not instead of the healthy foods.

Usually I add such foods at the end of the day, when I’m already stuffed with lean meat, EFAs, fruits and veggies. That tends to limit my ability to indulge. Of course, in strict fat loss phases, these calories should be the first to go.
Bottom line: As long as it doesn’t displace the good calories, you can have your cake and eat it too. Chew on that a while and then check back next week for Part II of this article: “Displacing Debates”!

I strongly recommend you pick up a copy of Precision Nutrition, where I’ll show you in great detail exactly what to do.