Use carbs on the big day to your advantage! Last Saturday my contest-day client list had its usual variety: men and women bodybuilders, figure competitors, masters-level clients, first-time competing clients, those in the U.S., and those abroad.Each week I set aside time to prepare peak week spreadsheets for those competing and though I wish I could say I have a magic formula that brings everyone to perfection; I don’t. After almost ten years I still have to create a complete strategy for each person, one at a time. I do scan the dark recesses of my cranium to consider what other clients I have worked with who have a similar body type and what methods I have used to peak them well. 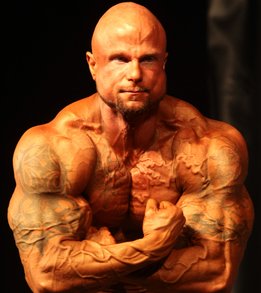 Jamie-19.jpgHowever, I then have to consider the current food levels, specific body type details, my observations of the lient’s progress and reaction to changes leading up to that point, the category of competition, the judging trends of that organization, and even the time of day they will be on stage. The fine-tuning can lead to day-to-day adjustments through peak week and even meal-to-meal course corrections on game day, but I must begin with a plan that I think will bring each client to their best and then hold it for a day. The first and biggest thing I consider is carbohydrate intake.

Of course, everyone thinks, “Carb-up, baby!! I want to be HUUUUUGE!!” I even had one client this week say he thinks he should be on 350 grams of carbs minimum all week – even though he’s dieted on less than half that amount up to this point. After two days of feeling bloated and looking like he lost a month’s worth of work, he asked, “Why don’t I look like I did last week? If I can’t get that tight again, I may not be able to do the show!” Um…duh? Most people dieting become more carb sensitive the deeper they get into the diet. Your body isn’t used to eating as much and assimilation processes are sharper due to biologically trying to horde energy. For many, a little can go a long way. 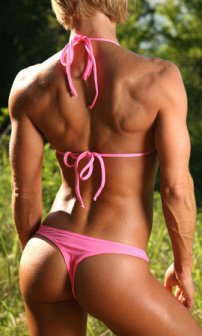 There are some clients, who due to a very fast metabolism or being ready early, create the need to increase carbs all the way through the final weeks will find they have to eat a larger amount. But again, we’re all different genetically and even contest to contest the circumstances will likely be dissimilar.

The goal of having the most glycogen in the muscle that you can hold is a correct one. The horrible word “spillover,” however, should caution you from wantonly just shoving pancakes down your throat. As my wayward client above found out, too much, too fast and you will get softer. Unused glucose will float around everywhere and attract water with it. You have to use amounts right for your body to store completely with nothing left over to get in the way of tightness. I hope you assume that means you’ll want to err on the side of not going overboard. If you’re slightly flat you can adjust. If you spill over it can take days to completely use the carbs, thus ridding the body of excess water, and regaining that crisp look you had.

As I stare at the computer screen contemplating the flow of a client’s peak week, I want to make sure we get carbs into the muscle yet by Friday have no extracellular glucose levels to deal with. I want them dry and tight by Friday. Not unlike the disastrous approach used by others, I do like the entire body worked out at the beginning of the week. And just like that commonly-used approach, a major reason is to use stored glycogen. Where I differ is that instead of depleting the entire body for days, I want so use the opportunity to store glucose deeply into the muscle. Just like the reason you want to eat carbs after training in a normal situation, I want that muscle pulling it in right now, not being starved and catabolic for three days. Muscle glycogen is not dynamic enough to use much of what we just stored until we use that muscle completely again. Most of what we store there now will stay there and that creates a stable environment regarding carbs and water. Some clients will need a similar amount of carbs daily while those workouts are being performed and some will need a slightly declining level of carbs to make sure they aren’t spilling over, but on the contrary, are inching slowly toward depletion.

Once we’re into the middle of the week with most of the training done, the muscle tissue is now semi-full of glycogen and the focus turns to making sure the primary goal of tightness is achieved. Again, for most this means trimming carbs back a little to avoid overages. For some with fast metabolisms, it may be a finer line to walk to make sure they’re not getting so flat that it’s difficult to fill them out. Let me talk about both extremes to make the point more clear.

By Thursday I may need to move carbs up slowly for an ectomorphic client to avoid them losing significant size. We can’t assimilate carbs instantly. You really need up to a full day to see the affect of the carbs you consume. If we wait until Friday to really bring up carbs drastically, we may never get as full as we could have been or we may risk spilling over – or both! Though carbs may have been higher at the beginning of the week and tapered down toward the middle; by the end we may be coming back up in substantial amounts. Some people chew through carbs so fast that they never really see the softness from spillover that I’m talking about. Others can drive by a bakery and get watery.

For those who are that carb-sensitive, over-carbing is a train wreck. Though I like to be bringing carbs up for even my slowest-metabolic clients, some just don’t tolerate much carbohydrate at all. Some can coast into contest day with carbs still low and the result is predictable tightness and no risk of spillover. It may surprise you to know that clients have won world titles with that approach. If you have done your homework, however, you may be able to tolerate a decent increase Friday and then just take Saturday morning more conservatively. As a carb/insulin-sensitive person, you do yourself a great favor by being ready early, re-sensitizing your body to higher carb levels, and then though still cautious, don’t risk being aggressive. Use water to stay full and tight and just enough carbohydrate to direct it into the muscle at the rate you can digest and assimilate them. Whatever side of the metabolic continuum you’re on, use carbs to make sure you’re tight first, full second, and ride that line as close to perfection as you can!