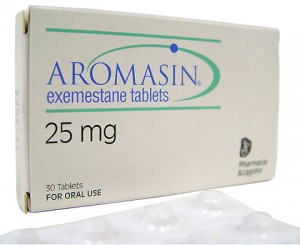 Aromasin is a steroidal aromatase inactivator used to lower circulating estrogen. It was developed to help fight breast cancer as estrogen plays a role in the growth of cancer cells. Aromasin binds irreversibly to the aromatase enzyme. This suppresses the conversion of androgens into estrogen. Circulating estrogen can be reduced by nearly 85% in women using Aromasin. A common misconception is that aromatase inhibition is similar in men than women. However in trials when males were administered 25mg of Aromasin daily, maximal estradiol suppression of 62 ± 14% was observed at 12 hours.

The reason for the difference may be related to the the much higher testosterone concentrations in young males than in postmenopausal women and the shorter half-life of exemestane in males. The terminal half-life in males (8.9 h) was considerably shorter than the published value of 27 h in females. This may be a basis for more frequent administration in men (or women administering testosterone) that want maximal E2 supression.

Aromasin acts as a false substrate for the aromatase enzyme, and is processed to an intermediate that binds irreversibly to the active site of the enzyme causing its inactivation, an effect also known as “suicide inhibition.” In other words, Exemestane, by being structurally similar to the target of the enzymes, permanently binds to those enzymes, thereby preventing them from ever completing their task of converting androgens into estrogens. When we compare this mode of action against other AI’s the benefit becomes clear. Arimidex can unbind from the aromatase enzyme when you stop taking it but Aromasin will not. Therefore, there is less chance of estrogen rebound with Aromasin.

Aromasin can be employed during a steroid cycle when aromatizing compounds such as testosterone are administered in order to control estrogen from getting out of control. During the course of a typical steroid cycle estrogen can rise quite high. Estrogen has been measured as much as 7 times higher than normal in men on steroids. This is excessive and can potentially cause water retention, gynecomastia (the formation of female breast tissue), negatively effect libido or cause benign prostatic hyperplasia. Therefore in order to avoid these side effects estrogen must be controlled.

Aromasin not only lowers circulating estrogen and sex hormone binding globulin but it also increases free testosterone by a whopping 117%! Total testosterone increases about 60%. Check out the performance of Aromasin after just 10 days of treatment in males.

Aromasin may be used during a steroid cycle with aromatizing compounds and during PCT to help keep the estrogen to testosterone balance in favor of testosterone. Out of all the medications to control estrogen, Aromasin seems to be the most well balanced. It raises testosterone similar to Arimidex and lowers estradiol about 10% better than arimidex in men and is likely to cause less estrogen rebound than Arimidex. Keep in mind that 50mg of Aromasin daily kept estradiol in the normal range for men so if you think using an aromatase inhibitor will crush estrogen too much this science supports the opposite. Additionally, plasma lipids and IGF-I concentrations in men were unaffected by Aromasin treatment. From the data I have read and my years of experience with this medication, 25mg of Aromasin every other day is a good starting point on moderate doses of testosterone. If testosterone doses are raised then 25mg daily may be needed to control estrogen. Since either high and low estrogen can cause side effects such as low libido only labs can determine the appropriate dose of Aromasin.