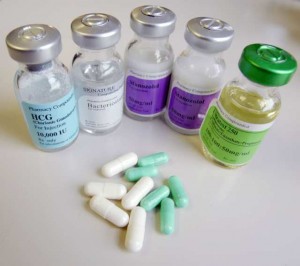 Bodybuilders are athletes interested in building up musculature while minimizing body fat. Bodybuilding is a constant evolution through various stages of building and refining, overindulgence and restraint, intensity and moderation. The cessation of mass-building cycles using anabolic-androgenic steroids presents a vulnerable transition for a bodybuilder. Most importantly, his system’s natural androgen production must be quickly and efficiently resumed since administering AAS inhibits signals to produce anabolic hormones within the body. The changing of the guard, from exogenous back to endogenous androgens, can make or break the permanent nature of the acquired muscle mass. Proper post-cycle therapy is crucial.

Some preliminary attention must be paid before a steroid cycle begins. Six to 12 weeks before embarking on a drug-assisted cycle, metabolic issues associated with overeating should be cleared up. It’s best to address insulin insensitivity before muscle building even begins. Taking time to optimize metabolism and body composition beforehand helps ensure proper calorie partitioning during the cycle. Total body fat should present a reasonable fat-to-muscle ratio. Throughout periods of overfeeding, a lean body will be predisposed to build more muscle than fat. It’s also important to not be afraid to overeat during a mass-building cycle – the anabolic environment must be properly fueled for growth to be maximized. This is even more significant when administering AAS. Testosterone and its derivatives, administered to deliver supra physiological amounts of androgens, increases caloric requirements due to improved protein synthesis. Without the bricks and mortar, it doesn’t matter how many contractors you employ to build your house.

To effectively terminate a cycle, it’s necessary to look at the transition in its entirety. A holistic approach can ensure a pleasant return back to training natural. Post-cycle psychology, endocrinology, nutrition and training need to be properly adjusted to ensure a quick and successful recovery.

The psychological impact of coming off a profitable AAS-assisted muscle building phase is considerable. It’s helpful to build up a desire to come off. If the trainee actually spent several weeks – peddle to the medal – he should be ready to transition into a less intense period. The training and nutritional requirements to make impressive muscle gains using progressive overloads should make anyone look forward to a break in the routine. After accumulating some additional fat and water weight, leaning up a little should be a welcomed event. Frequent injections required to maintain even blood-androgen levels can get tiresome as well. Each phase of training – such as muscle building, fat burning, maintenance and detraining – should be viewed as a requirement to transition to another, in order to build a bodybuilder’s physique. Program variation in itself plays a crucial role in preventing overreaching in resistance training.

A week or two before an AAS cycle ends, the diet should begin restricting high-carbohydrate, high-sugar food choices. Taking the time to increase insulin insensitivity, developed from the previous period of over-eating, will make post-cycle therapy more effective. Insulin insensitivity and low testosterone levels predispose the body to accumulate adipose tissue – to get fat.

The most vulnerable period is after the final steroid fully metabolizes in the body. From that time on, the athlete is once again solely dependent on the hypothalamus signals for androgen secretion. High levels of AAS shut down the hypothalamus’s signals to produce gonadotropin-releasing hormone. Luteinizing hormone normally travels from the pituitary to the testes where it triggers the production of testosterone; without GnRH, the pituitary gland stops releasing LH. Without LH, the testes shut down their production of testosterone. Since administering AAS inhibits natural testosterone production, impairment of the hypothalamic-pituitary-testicular axis must be quickly addressed – to quickly shift the anabolism-to-catabolism ratio back into the athlete’s favor.

Everything must be geared toward stimulating maximum endogenous testosterone production from the testes, as well as suppressing supra physiological levels of female sex steroids in the blood. Estrogen can build up to significantly high amounts depending on the particular steroid cycle; more specifically, how it interacts with the aromatase enzyme. Excessive estrogen will further delay recovery of the HPTA. A lot of bodybuilder’s do not realize that high levels of post cycle estrogen will keep them suppressed.

Ancillary drugs have long been used to support the post-cycle transition back to a natural environment; such as, Clomiphene (Clomid), Tamoxifen (Nolvadex), Anastrozole (Arimidex), and Human Chorionic Gonadotropin (HCG). The exact post-cycle prescription is based on the steroid compounds used, the total hormone burden, and the how long the system was exposed to supra physiological plasma levels – drugs, dose and duration. The old method of tapering the steroid dose down only delays HPTA recovery and extends the cycle’s duration.

Clomid is a common anti-estrogen drug used after a steroid cycle. It is an effective estrogen antagonist in the hypothalamus. In a clinical setting, it is primarily used to help women ovulate (produce eggs for procreation) but has also been used to treat male infertility. Studies have demonstrated that insulin sensitivity increases Clomid’s effectiveness as a female fertility drug. Men coming off an anabolic steroid cycle should address issues with insulin resistance prior to beginning post-cycle therapy drugs.

In addition to the testes, the adrenal glands also pump a small amount of testosterone. Stimulating adrenalin rushes may also serve some post-cycle benefits – such as running brief sprints or drinking caffeinated beverages.

It’s necessary to calculate the change in daily caloric requirements after gaining a greater amount of lean body mass. Insufficient food intake can promote low androgen production. If a trainee eats in a deficit, the body will strip metabolically expensive muscle mass. Human metabolism does not see accumulating massive amounts of muscle as a safe condition, from an evolutionary stand point. If the body notices a caloric deficit for too long – or inadequate rest for that matter – it will become more efficient by lowering metabolism. A great way to become more economical in energy consumption is by decreasing endogenous androgen production (leading to conditions like depression and decreased sexual interest). This sets the stage for several events that inevitably lead to muscle wasting.

Many dietary supplements can be invigorating and foster proper disposition. Omega-3 and omega-6 fatty acids play a crucial role in the function of brain chemicals, particularly serotonin and dopamine. Some studies suggest 5-HTP, a by-product of tryptophan, may be as effective as antidepressants. Inositol is a naturally occurring substance involved in the production of certain brain chemicals. Tyrosine, a nonessential amino acid synthesized in the body from phenylalanine, is a building block for several important brain chemicals. Tyrosine is needed to make epinephrine, norepinephrine, serotonin, and dopamine, all of which work to regulate mood. Central nervous system stimulants can be helpful. Some reports indicate that the mineral selenium significantly affects mood.

Dietary fat intake is linked to influencing androgen secretion. To avoid fat gain, a high-fat diet should be kept reasonable while testosterone levels are quite low; such as the period immediately after an AAS cycle has ended. Also, a high-fat diet in combination with insulin resistance and currently low testosterone can counteract any potential benefits. Research indicates that monounsaturated and saturated fat raises testosterone levels, but polyunsaturated fat does not. Moreover, foods high in healthy omega-3 fatty acids are good fat-raising options. The best sources of omega-3s are fatty fish like mackerel, herrings, sardines, tuna, sturgeon and salmon. Various plant foods also provide these fatty acids; such as walnuts, pumpkin seeds, flax seeds, flax seed oil, and canola oil. Oily fish is a much richer source than plant-based alternatives.

Providing time to detrain allows the body to rest and fully recover from a preceding cycle of intense exercise – especially when flirting with signs of overtraining syndrome. Muscular characteristics of detraining in humans, published in the official Journal of the American College of Sports Medicine, cultivates over 50 studies and over 30 years of research into detraining. When 12 weight lifters stopped training for 14 days, they experienced a modest 6.4 percent decrease in fast-twitch muscle fiber cross-sectional area. Interestingly, increases were observed in plasma concentrations of growth hormone (58.3 percent), testosterone (19.2 percent) and the testosterone-to-cortisol ratio (67.6 percent); cortisol levels decreased by 21.5 percent. The hormone changes would benefit any athlete trying to recover after an AAS cycle.

There seems to be a direct relationship with the type of training used prior to an inactive period. Performance of slow eccentric muscle contractions are essential in promoting greater and more long-lived neural adaptations to training; also known as, muscle memory.

An entire two-week break from training is often too much post cycle. Depending on signs of overtraining syndrome, a three- to seven-day lay off would sufficiently help kick start the gonads. After detraining, an abbreviated training routine, with adequate rest days, should be used from one to four weeks, depending on the AAS cycle – drugs, dose and duration.

The post-cycle maintenance routine should focus on compound free-weight exercises and center on enjoying what has been built thus far – not showing impressive new numbers in a training log. This will help stimulate natural testosterone levels, as well as solidify muscle gains. A 2006 study at the Research and Sport Medicine Center in Spain, compared 11 weeks of failure versus non-failure resistance training on hormonal responses, strength and muscle power gains. Strength gains were strikingly similar, but most importantly for this context: non-failure resistance training resulted in reduced resting cortisol concentrations and an elevation in resting serum total testosterone concentration. Researchers even noted that non-failure training demonstrated a beneficial stimulus for improving strength and power, “especially during the subsequent peaking training period, whereas performing sets to failure resulted in greater gains in local muscular endurance.” Maintenance routines should avoid advanced failure principles; keep it abbreviated and simple. Sets using high repetitions (15 or more) should be avoided since they task the cardiovascular system and are less productive for supporting functional and forceful strength levels. Low repetitions (five or less) should also be discouraged since they heavily task the nervous system. It’s important to enjoy working out during this period – to take pleasure in the gains and simply fight to maintain. It is not feasible to try and grow forever, but rather in spurts.

If done correctly, you can solidify gains post cycle and even continue to make small improvements. The workout journal should document any loss of limit strength. In advanced trainees, strength and muscular power is directly proportional to muscle mass. These little books are so important in gauging progress or digress; to train or go through post-cycle therapy without one is ridiculous. Great battles are not won without a map. Bodybuilding also needs a well-written, thought-out plan.

Effective AAS cycling is not determined by any one phase. Proper attention must be paid pre, during and post cycle. These powerful little hormones play big roles in the human body – influencing growth, metabolism and reproduction. Responsible integration, combined with a well thought out plan, will lead to greater achievements in muscular growth at minimal risk. Long-term sustainment requires persistent and sufficient training and nutritional support over the long haul. Bodybuilding is not a sprint – it’s not even a marathon – it’s supportive education and innovative strategies, combined with regimented application.