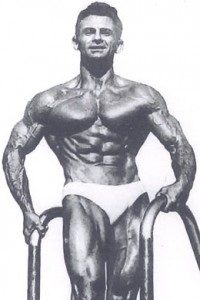 Vince Gironda broke the mold with his unorthodox training methods and nutrition strategies, but he left a lasting imprint on the bodybuilding community. As part the ubiquitous Arnold, very few famous bodybuilders are known by their first name alone. Vince Gironda, however, predates the mighty Arnold for being known by just his first name or nickname the “Iron Guru.”

Perhaps it’s just coincidence that they were referenced the same way, or maybe each man’s major impact on bodybuilding warranted the special title as Vince and as Arnold. Certainly, both are legends in their own rig

ht, and Vince was one of the best bodybuilders of his time.

For Vince, there were only ever two ways to train: the wrong way or the Vince Gironda way; there was no in between. Let’s take a look at some of Vince’s theories towards bodybuilding training.

This is unique concept Maximize Your Muscle members are familiar with – three weeks of hard training followed by one week of rest. In my experience, three weeks is the average length of time, some can actually train hard for four or five, maybe some for six weeks. It depends on the individual and many variables. If you incorporate the Train 21-Rest 7 Rule into your regime, ensure it’s a planned part of your training program just as your exercise routine.

Rest is nature’s method of restoring the nerves and whole body. Robbing yourself of needed rest will prevent central nervous system recovery and metabolic recovery. Nerves requires more rest than muscles. Vince recognized that none can train exclusively on a concentrated program for too long because the time will come when it will cease to get further results. Some term this point as being a sticking point or staleness, whereas Vince termed it over taxing the nerves and muscles.

This is a concept that does not need to be applied to enthusiastic beginners. It’s an advanced concept for experienced bodybuilders who experience sticking points more frequently.

Agree or disagree with Train 21-Rest 7 ? Let me know below.

2. A Muscle Has Four Sides

If you ever got the chance to review some of Vince’s courses you’ll recall his course called A Muscle Has Four Sides. This peaked bodybuilders interest from the time it was published. Vince stated, “All concepts I have advanced over the years have initially met with certain amount of skepticism, usually because initially they seem too simple to achieve the results desired in the time given. Yet eventually, sometimes twenty-five years later, these concepts are accepted around the world as standard training aximos. I will tell you now what the secret of success really is. Believe that the course I give will work and it will. If you have doubts, and don’t put everything into it, then you will find it will not work. The following course, A Muscle Has Four Sides, is based upon the fact that different exercises develop different parts of a given muscle. By doing four exercises, one for each part of the muscle, you will achieve the fastest muscle growth…”

A Muscle Has Four Sides Sample Workout For BicepsGet all equipment ready for all four exercises so you can do each exercise one right after the other with no rest between.

Do each exercise for 12 reps.

Do only one compound set (1 time through all 4 exercises with no rest in-between).

Do this workout in the AM and then again in the PM (at least 4 hours apart). In the second workout, you can do lighter weight but keep your form stricter style and tighter muscular contractions.

There is no abdominal work done in this course. This is a muscle-size building course and ab work can shock the solar plexus and slow gains.

Work each muscle every 4 to 5 days like the following split below .

Eat protein every 2 to 3 hours that you are awake.

Vince has a list of common errors bodybuilders were guilty of. I’m not certain but I believe he added to the list as time went by. If he noticed something it would placed on the list. Here’s just a small list of things he distinguished as wrong:

1. Working upper body and legs on the same day.
2. Not touching chest to bar and calling it chinning.
3. Not raining the big toe and pulling heels together when performing calf raises.
4. Bench presses for pecs. This is 90% front delt work.
5. Not touching all four bells together on dumbbell benches. This also is 90% front delt work if you do not touch the bells together (when doing chest press).
6. Under working or overworking a muscle by performing too wide a variety of exercises on a given muscle.
7. Cheating exercises.
8. Presses for delts.
9. Mixing carbohydrates and proteins.
10. Behind the neck chins or pull downs.
11. Skipping breakfast.
12. Swimming.
13. Side Bends.
14. Not taking enzymes at every meal.
15. Not arching the back while performing lat work.
16. Distraction.
17. Music in the gym.
18. Not selecting the proper exercise for deficient muscle areas.
19. Not keeping chin on chest, feet under the face and elbows wide on parallel dips for pecs.
20. No knowledge of combing exercises.
21. Not changing an exercise program often enough.
22. No knowledge of breaking a rut.
23. Not specializing on slow growing areas.
24. Not taking supplements.
25. Taking too many supplements.
26. Lack of conentration during workouts.
27. Unwillingness to accept new or different concepts.

Quite a list huh? Rumor has it that Vince could talk all day about any of these and even today, with the scientific advancements, he would be right on most of what he said.