Why You Shouldn’t Train Abs To Failure

Smart trainees know that progression is the name of the game in fitness and strength training. However, as you continually test your limits of accomplishment, whether that’s reaching a new level of leanness, increasing your muscle mass or obtaining a new strength maximum, you often fall prey to the belief that you must push yourself to the point of complete “failure.” This is the point where you reach a level of fatigue and exhaustion that causes your muscles to literally give out (“fail”) and you can’t complete another rep.

Training with progression and intensity is important, but unless you’d like to trade a nice set of abs for a bad lower back, I’d strongly urge you to re-evaluate the concept of training to failure, especially when it comes to core and abdominal workouts and especially if you’re not a bodybuilder.

Why do so many people believe in failure training?

Training to “failure” became popular in part, because of bodybuilding culture and bodybuilding gurus such as Mike Mentzer and Arthur Jones, and then the information filtered into the mainstream fitness world. Athletes, who tend to be as competitive with themselves as they are with their opponents, also sometimes push themselves as far as they possibly can in their quest for sporting excellence. 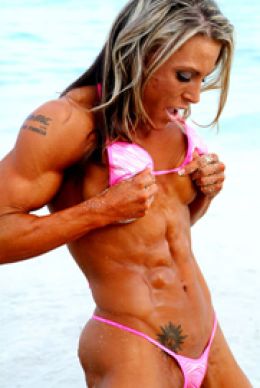 This approach may be misguided and possibly even dangerous.

There may be a small place for taking some sets to the point of failure in low volume bodybuilding programs. But even bodybuilders who train to failure too often may be gaining less benefit than they think, while increasing their chances of overtraining or even injury.

I believe strongly that the added stress of training to failure or total fatigue can cause more problems than it’s worth and the potential benefit is not worth the risk. I have rehabilitated many back pain patients because of their stubborn beliefs in “pushing it to the limit.”

Out of all the muscles and movements in particular, it is very important to stimulate your core and abdominals and not “annihilate” them. Be very careful not to over-train or over-stress your abs and core and this means, do not train your abs to failure.

One of the biggest problems with training the core and abs to failure is that the more fatigued you become, the more your form begins to break down. When your form breaks down, that is when injuries are most likely to occur. This is true for any exercise, but it may be truer for abs and core than any other type of exercise due to the susceptibility of the lower back.

Research by Dr. Laurence Morehouse of University of California at Los Angles found that when doing abdominal exercises, especially sit-ups, you over-work your hip flexor muscles – the psoas and the iliacus. When the exercises are performed quickly (form breaks) or all the way to failure (form breaks), the hip flexor’s pull on the lower back is increased.

When performing your core exercises, always be conscious about form, especially as you begin to get tired toward the end of a set. You should terminate your set at or before the point where you notice that your form breaks in the slightest, and that is usually a couple of repetitions before reaching muscular failure.

Progression Can Occur Without Failure

If you believe that stopping short of failure will hold back your progress, think again. Progress is a function of progression and progression can take place without failure. You can continue to improve your workouts and thereby your physique and performance by increasing repetitions and or resistance or even density… without ever training to failure.

One point about proper form that few people realize is that if you train to the point of failure, which leads to a breakdown in form, this can lead to the development of poor motor engrams. Your nervous system can develop “bad habits” so to speak, as your body tends to automatically revert to what you practice the most. If the last repetitions of every set are usually done with poor form, then repeating that motor pattern is much more likely to occur in the future, leading to additional muscle and joint damage.

I design core conditioning programs in a specific way so you train smarter and avoid temptations that lead to poor form and potential injury. And that leads us to…

The 3 Keys To Smarter Ab Training

First, I recommend that exercises are performed in a certain order

By placing the more neurologically demanding and form intensive exercises first in a carefully planned sequence, I help my clients avoid a situation where fatigue and form breakdown would be as damaging. If you attempt the opposite, you increase the chance of over fatiguing the segmental stabilizers of the spine and you produce poor motor engrams.

More details on exercise sequencing are beyond the scope of this article, but you can learn more in my Firm and Flatten Your Abs program and in my Six Weeks to Six Pack abs report (visit www.FlattenYourAbs.net for more information).

Nowhere is strict form more important for your safety and results than in core and abdominal training. The simple advice of slowing down the tempo and focusing on form will increase results and help keep you out of the doctor’s office.

There are times when you may want to perform core exercises at a higher rate of speed with more velocity or explosiveness. This is often the case with athletic, sports-specific training. But speed and form are not mutually exclusive and the same rules about fatigue and failure still apply to explosive training.

I train elite boxers and when they first show up at my studio, they are often set in their old ways of failure, fatigue and overtraining. I’ve seen it over and over again: A new client’s routine consists of “workout till you drop” and then 1000 flat board sit-ups. I simply ask: “How is your lower back”? The answer usually is, “It’s sore” at best, or “It’s injured” at worst. Even if they’re simply experiencing unnecessary soreness, that gets in the way of sport-specific training and their progress is slowed all around or grinds to a halt.

Third, you must get clear about the desired outcome of your training

Many strength trainers and bodybuilders are convinced that the outcome of a workout should be “burn,” fatigue and failure. If you think that aching muscles is the desired outcome, then why even go to the gym? Come over to my garage and I’ll whack you a few times with my sledgehammer then sit you up on my barbecue grill. You’ll “ache” and “burn” alright!

Joking aside, you must get clarity about your real training objectives – they’re NOT pain, fatigue and failure. If you begin with the right end in mind, you’ll set about reaching that end more intelligently.

Your training objective is to strengthen your core region for support, stabilization and protection of your spine and body organs, and your ultimate outcomes are to be healthier, perform better and look better (perhaps in that order of priority!)

These objectives are best accomplished by performing your exercises with strict, controlled form, and by using movement patterns such as flexion, extension and rotation. However, any one of those movement patterns taken to extremes can eventually cause damage to joint structures, which can put you on the sidelines and only take you further away from your true objectives.

Progression and intensity are often confused with the need to train to failure. From this day forward, I suggest you re-evaluate the scientific facts as well as your mindset towards your training. Get clear about your true objective and train to succeed, not to “fail.”

For more information go to www.SixPackAbs.com

David Grisaffi majored in physical education and holds multiple certifications including 3 from the prestigious CHEK Institute: Level II high Performance Exercise Kinesiologist, Golf Biomechanic, and health and lifestyle counselor. He’s also certified by the ISSA as a personal trainer and specialist in performance nutrition. David has been a high school wrestling and baseball coach and is currently an independent trainer and strength coach. He has been sought after by some of the top athletes in professional sports including world champion boxer Greg Haugen and professional golfer Michael Putnam. David’s ebook, Firm And Flatten Your Abs is an online best seller which teaches you how develop “six pack abs” while improving strength, function and athletic power at the same time. Find out more on the home page at: www.FlattenYourAbs.net