You’ve heard of the “See-Food” diet haven’t you? No, that’s not the diet where you load up on fish, lobster, crab and mussels. The See-Food Diet is the one that so many of us crack jokes about – it’s the diet where you eat everything in sight! But don’t laugh too hard. Scientists at Cornell University and other research institutions have proven that you actually WILL eat more food if you see food more. In fact, if you can see it and it’s within arm’s reach, you could eat yourself obese within a few years and not even know what hit you because the eating happens unconsciously.copyright cornell university food and brand lab. Photo reprinted with permission

It should be common sense that when you’re constantly surrounded by food, you tend to eat more. 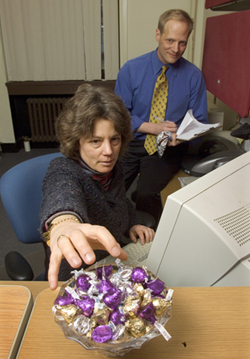 But one thing that hasn’t been clear until recently was how seeing food (visibility) and having it within reach (proximity) could influence unconscious eating (and how it influences what I call “eating amnesia”).

Developmental psychologists tell us that the more effort or time you invest in a unique activity, the more likely you’ll be to remember it.

In other words, if you have to go out of your way to go get food, you’ll remember eating it. If the food is right there within arms reach, you’ll munch away and more easily forget it.

For years, Dr. Brian Wansink of the Food and Brand Laboratory at Cornell University has been conducting fascinating experiments to find out what really makes you eat more food than you need.

Some of his previous studies revealed that taste, palatability, mood, stress, social context, role models (parental influence), visual cues, visibility and convenience can all influence how much you eat (Eating behavior is environmentally and psychologically influenced – appetite is not just biological).

To explore the influence of food proximity and visibility on eating behavior, Wansink set up an experiment using 40 female staff members from the University of Illinois at Urbana-Champain. The subjects were not told it was a weight loss or calorie-related study. They were told that they would be given a free candy dish filled with chocolates (candy “kisses”) and they’d be contacted and surveyed about their candy preferences. They were also told not to share the candies, take them home or move the dish.

Participants were divided into four groups:

During each day of the four week study, 30 chocolates were placed in 20 clear containers and 20 opaque containers and delivered to the 40 subjects. The containers were replenished every afternoon. They were kept in the same location for 4 straight business days and then rotated on the following week. Researchers kept a daily record of the number of chocolates eaten from each container and comparisons were made from the data collected.

When the results were tabulated, here’s what Dr. Wansink and his research team discovered:

The visibility and proximity of the candy dish also influenced the subject’s perceptions. Regardless of whether participants could actually see the chocolates, if the candies were sitting on the desk (as opposed to being a mere 2 meters away), they were rated as more attention-attracting and difficult to resist. Candies in the clear containers were also rated as more difficult to resist and more attention attracting.

Most interesting of all, this study confirmed that when food is close by and visible, you’ll not only eat more, you’ll also be likely to forget that you ate them and therefore, underestimate how much you’ve eaten (I like to call that “eating amnesia.”)

Is a few extra candies a day really a big deal?

If it becomes habitual it sure is! Over a year, the difference between the candy dish placement would mean 125 calories per day which adds up to 12 extra pounds of body fat over a year.

When given the advice to keep junk food out of the house and office, I often hear complaints that it’s “impossible” to do because the rest of the family would have a fit, or simply not allow it. As for the office, one of the biggest excuses I’ve heard for diet failure is that the temptations are always there and it’s out of your control to change. Invariably someone else brings doughnuts or candy to the office.

Now you know what to do to reduce temptation and successfully stick with your program more effectively:

At home, if your significant other or family is not willing to remove all offending foods from the premises, then get their agreement that their food is not to remain in plain sight – it goes in the back of a refrigerator drawer and not on the shelf at eye level, or if non-perishable, it goes inside a cupboard that is exclusively the domain of the other person.

At work, tell your office pals to keep the candy, doughnuts and other temptations off your desk, at a distance and out of sight. If they put any unhealthy snacks on your desk, promptly remove them!

PS. I thought this was a perfect topic for the week after Halloween. You got any leftover Halloween candy floating around the house and office? Is it in a bowl right there where you can grab it? Come on, who’s gonna fess up?

PPS According to the NPD Group, which conducts research on eating trends, parents eat one candy bar for every two their children bring home on Halloween! (Who else is throwing out or at least “hiding” their leftover Halloween candy right now???)