What’s on the menu at fast food restaurants lately? Ironically enough, the answer increasingly is… “health food!” Even more incongruous, many fast food joints are advertising their food for weight loss. Healthy weight loss food at Taco Bell and McDonalds? Is this a positive move to be applauded, is it a big corporate money grab or is it a double edged sword? Here’s my two cents…Almost everyone remembers the Jared weight loss campaign for Subway. He was the guy who lost 245 pounds during which time he ate at Subway regularly. He simply picked the lower calorie items on the menu. Jared later became a spokesperson for Subway in their nationwide advertising campaigns which became known as the Subway Diet. 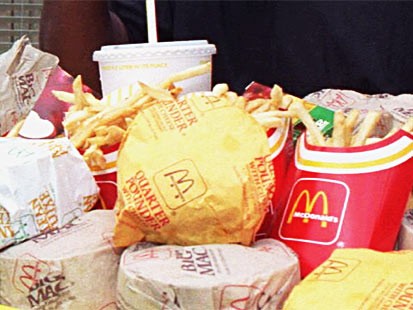 Right there at the counter they had the nutrition information sheets!

“These new fast food menu items are NOT healthy, they’re only ‘healthi-ER.'”

Let’s take a look at that very low calorie chicken wrap. Do you really think it’s healthier just because it’s got 1/3 the calories of a bacon cheeseburger?Here’s the ingredients straight from McDonald’s website: