Taking Another Look at Creatine 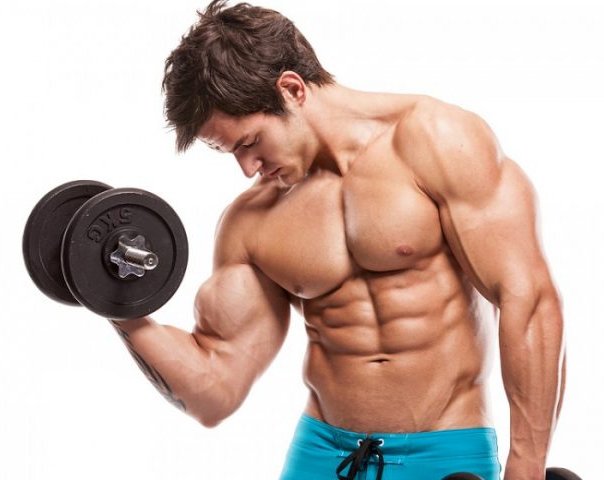 Creatine has been one of the most popular sports supplements since it’s introduction some 17 years ago. Yet, there is still a lot of mystery and confusion regarding it. In this article, I hope to clear some of that up as I detail what it is, it’s history, it’s use in bodybuilding, some of the different versions and it’s tie in to Nitric Oxide. Here we go!What is creatine?

Creatine is a nitrogenous compound that occurs naturally in meats and fish and is synthesized by the liver, pancreas and kidney. It’s also called metylguanidine-acetic acid and is produced from three amino acids: methionine, arginine and glycine. 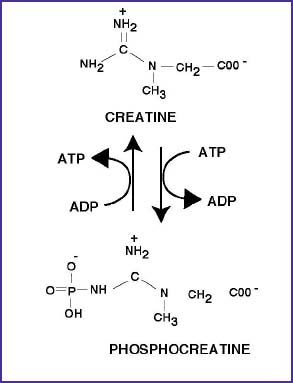 What is its history?

Creatine is not at all new, it was first discovered in 1835 by a French scientist named Chevreul. He named it after the Greek word for flesh “Kreas”. It wasn’t until 1847 that creatine was first linked to muscle tissue. In 1922, human studies dating back to 1910 were reviewed by a scientist named Hunter(1), in these studies, subjects were “loading” with creatine up to 20 grams per day for 6 days. In 1926, Chanutin2) detailed case studies where human subjects loaded 4 times a day for 10 days. In the 70’s, researchers thought insulin might be involved in the uptake of creatine, this was determined yet again in 1992 by Harris(3). It wasn’t until 1993, however, that creatine monohydrate was actually introduced as a supplement by EAS, it was called Phosphagen. Ed Byrd, an EAS co-founder and the man that gave us NO2 in 2002, was largely responsible for it’s introduction. Since then it’s pretty much taken the supplement world by storm and has proven to be one of the most effective supplements on the market.

What does it do?

Muscles store creatine as creatine phosphate, which functions as part of the ATP-CP energy system, also called the Phosphagen system. Muscle cells contain 4 to 6 times as much creatine phosphate as ATP. In fact, it can be said that skeletal muscle is a creatine requiring tissue.

ATP is the immediate energy source for muscle cells at both high and low intensities, however, it can take less than a second to burn your bodies reserve of ATP. This is where creatine phosphate ( also called phosphocreatine) comes in. Your body has a small reserve of creatine that your muscles can quickly convert to ATP. However, this will only power an all out effort for 3 to 15 seconds. As exercise intensity decreases and the duration increases, as in a marathon type race, your body turns to other systems of energy production. The Phosphagen system is used primarily for shorter duration exercise, as in bodybuilding training. At this point, we’ll turn this into an explanation of one of the things creatine does. Creatine use as a product that can enhance muscle cell energy production becomes obvious when you look at the re synthesis of creatine. There’s a regulating enzyme known as creatine kinase that breaks down creatine, separating the phosphate molecule from the creatine molecule. Phosphate then binds with ADP, which lacks just one phosphate from becoming ATP. So basically your body can “manufacture” fresh ATP through this process, which can take up to 4-5 minutes. Don’t many bodybuilding programs require at least a few minutes rest?

So, what’s the bottom line? Well, the more creatine available, the more that can ultimately be used for energy, allowing you to train harder and longer which, in turn, can lead to better results, be it improved performance, more muscle, more strength.

What else does it do? It acts as a “voluminizer” or “cell expansion” product by pulling water into the muscle cell, causing it to expand, resulting in a increase in muscle size and strength. This is a big category right now, largely due to NO products but creatine was really the first product to cause this effect. Some say that this is temporary and you lose your size when you go off. To a point this is true, but it’s also true for pretty much all aspects of bodybuilding, isn’t it? If you cut back on protein, you risk losing size, when you go off your steroid or pro hormone cycle, you lose size, when you stop training, you lose size. You don’t lose everything ( this is also true for all aspects of bodybuilding) but you will lose something. Regardless,most people will cycle creatine, taking 4-6 week breaks. Once you go back on, you gain everything back and more.

Here’s some of the versions out there, potential side effects and how to use them ( this list is not all inclusive, as there are new versions being added all the time):

Monohydrate – the original, this version requires sugar be ingested with it in order for it to be properly absorbed, a loading phase of 4-5 doses( typically 5 grams per dose) per day for up to 5 days and once a day thereafter. Some side effects reported in some users are bloating, gas and diarrhea.Ethyl Ester – requires less total grams to be effective, no sugar needed and no loading. This version, as is the case with most newer versions, eliminates the monohydrate effects. Available as a pill or powder, you usually take one serving ( usually 2-3 grams) twice a day.

Buffered Creatine – Here’s a currently hot one, also known as Kre-Alkalyn. This version actually has a patent on it, #6,399,631. The research on this ties into creatine’s speed to convert to creatinine. Creatinine is a waste byproduct of creatine, it’s usually produced at a fairly constant rate, gets filtered through the kidneys and passes out in the urine. The advertising behind this product talks about creatine converting quickly to creatinine when mixed in liquid (many creatine products encourage drinking their powder within 10 minutes of mixing for this reason). The research behind this product indicates that as the ph of creatine rises, conversion to creatinine slows. At a ph of 12, it stops altogether. So, this version solves that problem, requires less total creatine per serving, removes any potential gastric discomfort. With this product, you use 1-2 grams in the morning and again before training.

Liquid Creatine – not as popular as it once was, this type of creatine’s biggest complaint is the lack of stability in this form. I agree with this and don’t typically recommend this version.

Conjugated – Here we have perhaps the hottest creatine product currently on the market, Con-Cret by Promera. Most newer versions of creatine deal with a few basic issues concerning standard monohydrate: absorption, dosing levels, and removal of side effects. This product is a concentrated creatine, requiring a “micro-dose” of ¼ teaspoon. Here again, you have superior absorption , no side effects, and less total creatine required.

It should be noted that you can take creatine before and even after workouts, some people drink it before and during the workout. Taken after, you still want your post workout shake of fast digesting protein and and fast digesting carbs but I would let a bit of time elapse before you drink it.

So, do any of these “new, improved” versions really work that much better than the standard monohydrate? Well, while I have not used all versions (I haven’t tried con-cret yet but am planning on it), I myself see no real difference among versions. If, like me, you don’t mind loading and don’t see any side effects from monohydrate, you should find that this version still works as well as anything. However, by all means test out the different versions and see what you think, they work well too. From a cost effective stand point, however, straight monohydrate powder is extremely economical.

Sadly, there is still, after all this time, a lot of misconception about creatine. Some people, including members of Congress and some sport federations, think creatine is a steroid. Ah, yes the old, tired “is it a steroid ?”question. I’ve worked in the retail supplement business since 1990 and to this day, people still make cracks about us “selling steroids”. And yes they actually think we have them, right there on the shelf and that creatine is one of them. No, creatine is not a steroid, it will not kill you or ruin your kidneys. As should be the case anyway, you should be drinking a lot of water as part of your daily program as this does help to flush out creatinine, the waste by product of creatine. As well, this is one reason why many people cycle products, to give your body ( and wallet) a break. Also,with the new, lower dose creatine’s on the market, this argument really doesn’t stand up as well anymore as you can now take in much less total creatine then when using the monohydrate version. Additionally, make sound choices, meaning choose a quality brand with a good reputation. Now, in a case like this, or when looking into any product you intend to possibly try, look past uniformed sources like the general media,(the media loves to report on creatine risks. If there is even a hint that it could possibly be involved in the death or ailment of an athlete, they jump it. When it is later shown that creatine played no role whatsoever, they don’t report that with quite the same enthusiasm. Sadly, this is true of any nutritional supplement),or some buddy that’s never touched a weight in his/her life and look at respected research, this is where you can get sound reliable information from, this is how you make your own choices in an intelligent manner on what to use and what not to use.

How does Creatine tie into Nitric Oxide?

Now, earlier in this article I mentioned NO and cell expansion. What is NO and what does it do? NO, or Nitric Oxide,is a gas produced by the body from the amino acid arginine. It’s a cell signaling molecule that isinvolved in numerous functions, some of which include controlling nutrient delivery, initiating hemodilation, the widening of blood channels. NO really enhances the “pump” sensation we get from exercise, this is in fact “cell expansion”. One of the reasons enhancing the pump is important is that nutrients are delivered faster and waste products are removed faster, allowing for faster recovery between sets and between workouts and ultimately better workout performance because you’re getting fuel to your muscles faster. As mentioned in the discussion on creatine, you will see increases in size and strength with NO due to the forcing of fluid inside the muscle cells. Most products in the cell expansion category combine creatine and Nitric Oxide,along with other nutrients, commonly in pre workout drinks, such as NO-xplode by BSN. These drinks are great if you don’t mind the caffeine which helps with training energy and focus. Separate from this, however, is the idea of simply stacking a NO product with a creatine product.

And, yes all the questions and answers about the gains being “temporary” apply equally to NO products.Yet, this is a great stack for most anyone looking for results, it is in fact one of my favorite stacks. I love the feelingI get from this combination and the results: I always see a solid 4-6 pounds from this combo. If you’re one of those people that doesn’t want to use steroids, pro hormones, or even more basic testosterone boosters, this stack is a great choice. I advice using a stack like this for 6-8 weeks, then take a break of 4-6 weeks. If you are using an NO-xplodetype product, you are getting small amounts of creatine and NO, you can enhance the effect further by adding this stack.

Jim Brewster has over 30 years experience in bodybuilding and
is known internationally as an authority in the fitness field.

Newer Post
Why Fat Cells Multiply and What To Do About It
Older Post
Muscle Master: rhymes with disaster