Possibly one of the longest standing debates in sports nutrition (not that people don’t argue about stuff constantly) is over protein requirements for athletes. Traditionally, there have been two primary and opposing views to this topic.In the first camp are mainstream nutrition types, usually registered dieticians who maintain that the RDA for protein is sufficient for all conditions, including individuals involved heavily in sports. Their bible, the RDA Handbook mirrors this stance. So what is the RDA? Currently it’s set at 0.8 g/kg (0.36 g/lb) protein per day. For a 200 lb individual that’s a mere 72 grams of protein per day. I bet most of the people reading this eat that at a meal.

At the other extreme are the athletes themselves who have long felt (and therefore argued) that high proteins are absolutely necessary for optimal results. Bodybuilders have traditionally used 1 g/lb (2.2 g/kg) as a baseline recommendation with others taking this level to 2 g/lb (4.4 g/kg) or sometimes even higher. Muscle magazines, usually with a vested interest in moving protein powder tend to promote high protein intakes with claims of athletes eating 800-1000 grams protein per day (a level only achievable with supplementation) being claimed by top bodybuilders. 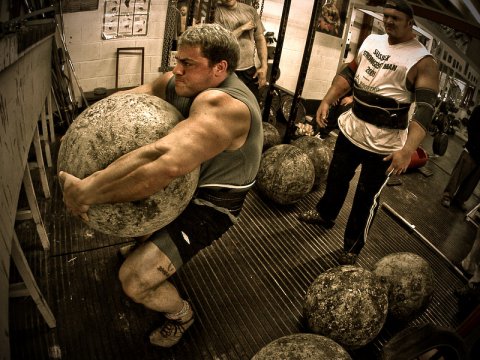 Science nerds like me always want to see the research on the topic. Of course, if you know me at all, you know that I’ve read it all. To say that it’s a bit mixed is an understatement and even researchers can’t make up their damn minds, preferring to hold polite arguments with one another for months in scientific journals.

Some research seems to clearly indicate an increased requirement for protein. But it uses a methodology (nitrogen balance) that is questionable at best, so the low-protein folks will shoot it down.

Other research (done with low intensity aerobic work) suggests that training improves protein retention; that is, as athletes become more trained, their protein requirements may actually go down. But does research with lower intensity aerobic work apply to the kind of training a strength/power athlete is doing? Probably not, so the high protein researchers will shoot that down. Around and around it goes.

Some research (again using a questionable methodology) suggests that athletes need more protein when they start a new or intensified training program but after a couple of weeks, protein requirements go back down. What happens if you’re always pushing your limits day in, day out, week in, week out? Nobody knows.

Of course the impact of anabolic steroids on protein requirements is almost a complete unknown although, empirically, most who would argue that a natural bodybuilder only needs 1 g/lb daily would also argue that someone using anabolics needs about double that to maximize the effects of the drugs.

A final problem is what’s being measured. Athletes want to know what will maximizes their performance, strength, power, speed, throwing, etc. Researchers invariably measure stuff of less relevance to athletes and coaches. Nitrogen balance, amino acid uptake, sometimes actual muscle growth is measured over the length of the study. Is the amount of protein needed to optimize performance different than what’s needed to maximize some aspect of muscular physiology?

An added issue is that solely looking at skeletal muscle may be missing pathways of importance to athletes. Immune system, connective tissue synthesis and a host of other pathways use amino acids; presumably athletes will upregulate those pathways. Meaning that true protein requirements, if you only look at what’s going on in the muscle, may be under-estimating what athletes truly need to maximize every aspect of performance.

The debate rages on and on and I’m not going togo into much more detail here about it. If you want to read about it in seemingly endless detail, I spent an entire chapter addressing both sides of the controversy in The Protein Book.

Sufficed to say that, as is always the case, both sides have their research, both ends of the research can be criticized on some methodological grounds or another and I don’t think researchers are going to stop arguing with one another any time soon.

And yet, I’m going to tell you how to rationalize all of the above stuff that I imagine most of you skimmed in the first place. Two researchers, named Tipton and Wolfe wrote a cool paper about this argument. In it they first detailed all of the stuff I just bored you with. At the end they gave their recommendations where they basically argued that

Essentially, a high protein intake won’t hurt an athlete (basically everything you may have read about the dangers of high protein intakes is nonsense), it may provide small benefits of importance to elite athletes and, at the end of the day athletes and coaches don’t give a shit about pedantic scientific debates over amino acid metabolism that gives researchers and nerds like me a giant hardon. Admittedly, they didn’t put it in exactly those terms but that’s the gist of it.

So here’s my recommendation, strength/power athletes should aim for 1.5 g/lb protein per day (again, this is about 3.3 g/kg for the metrically inclined). So for a 200 lb strength/power athlete, that’s 300 grams of protein per day. For a 300 lber, that’s 450 grams per day. If you’re Jeff Lewis, I imagine your protein requirements are basically â€˜All of it’ or perhaps â€˜A cow’. Per day.

Since most strength/power athletes have plenty high caloric requirements, this will still leave plenty of room for the other macros and, if nothing else, will ensure that protein intake is not limiting in any way. I’d note that female athletes often restrict calories heavily (for both good and bad reasons) and it is possible for them to get into situations where protein ends up making up damn near all of their daily food intake. There is some evidence that female athletes can get by with less protein but I’m not going to get into that here; perhaps a later article for Elite Fitness can address that.

I’d add that athletes who are using anabolics may wish to take this even higher, 2 g/lb (4.4 g/kg) or possibly higher. Again, very little research here.

I should address one other issue that always seems to come up about now which is whether to set protein requirements relative to lean body mass or total weight. There are some good arguments for both. In theory, using lean body mass probably makes the most sense, fat cells don’t have a huge protein requirement. At the same time, problems in measuring LBM and the fact that a little bit too much protein is arguably superior to too little make total bodyweight more tenable. Or at least easier to use. I’d only note that, for athletes carrying tremendous amounts of body fat (you know who you are), scaling protein intake back to take that into account may no be a bad idea. It may not be necessary but it can still be done.

Having looked at the issue of quantity, I want to talk briefly about issues of quality and variety. Frankly, the whole deal with protein quality has been blown way out of proportion by most folks. Unless you’re talking about folks eating small amounts of single shitty quality proteins every day, it’s just not that relevant. So yeah, for someone getting 30 grams of some piss quality grain as their only protein source, quality matters.

When an athlete is eating 1.5 g/lb or more of high quality (read: animal source) proteins per day, it really doesn’t. Now, yes, there are differences between proteins in terms of digestion speed (which is relevant for around workout nutrition) and other micronutrients (e.g. red meat has lots of zinc and iron, fatty fish has fish oils, etc.), amino acid can vary too (e.g. dairy proteins have more leucine than other sources) but unless you live on that one source, it’s just not that critical an issue to worry about most of the time. Rather, I recommend that strength/power athletes try to obtain their daily protein from mixed sources every day. That way, any potential limitation of one protein will be fixed by the consumption of another protein. As well, although there isn’t much research to base this on, I feel that consuming different protein sources at a given meal may be superior to single sources. You’re getting slightly different amino acid patterns, digestion speeds, etc. You’ll see this reflected in the sample menus below.

Of course, protein powders are always an option. I think they tend to have their greatest utility around training but they can be used for athletes on the go, or who are working endlessly during the day and who need to get protein in large amounts quickly. For various reasons (discussed, of course, in my book), I prefer milk protein isolate (a mix of whey and casein) for most applications. Fast digesting proteins such as whey are most appropriate before or during training (I prefer MPI post-workout).

Putting it to Use

I want to make it clear that I didn’t present these meals in any order of importance, nor should readers simply do these meal plans without thinking about it. Rather, I wanted to show lifters how they could achieve the kinds of protein intakes I discussed above in a practical manner. Of course, bigger and smaller athletes can scale the numbers up or down (or add additional meals) as needed to hit their targets.

Let me make it clear that the above are purely examples of the types and amounts of foodthat athletes could eat to reach the protein intakes listed above. There obviously othergood sources of protein and athletes requiring less protein on a daily basis would scale the amounts downwards.

Lyle McDonald is the author of the Ketogenic Diet as well as the Rapid Fat Loss Handbook and the Guide to Flexible Dieting. He has been interested in all aspects of human performance physiology since becoming involved in competitive sports as a teenager. Pursuing a degree in Physiological Sciences from UCLA, he has devoted nearly 20 years of his life to studying human physiology and the science, art and practice of human performance, muscle gain, fat loss and body recomposition. Lyle has been involved, at various levels of success in competitive sports since his teens. Starting with triathlon, he spent altogether too many hours on his bike during college. Becoming involved with inline skating at the same time led him to compete for several years until he burned himself out with chronic overtraining. Many years passed until he decided to return to speed skating and move to the ice. He moved to Salt Lake City Utah to train full time at the Olympic oval, he is currently still there training with his coach Rex Albertson attempting to make the US National team or beyond.Lyle has written for the print magazines (Flex and the now defunct Peak Training Journal), too many online sites to mention (including Cyberpump, Mesomorphosis, MindandMuscle, ReadtheCore) and has published 5 books on various aspects of exercise and diet. Over the years, in addition to working with the general public, Lyle has worked primarily with endurance athletes, a few powerlifters, and some bodybuilders. Through his books, articles and his forum, he has helped thousands lose fat, gain muscle and get stronger or perform better.
www.bodyrecomposition.com