The most controversial weight loss story on the web this week: Mark Haub, a nutrition professor from Kansas State University, lost 27 pounds in 10 weeks on a “convenience store diet” with at least two-thirds of his food consisting of Twinkies, Little Debbie Snacks, Doritos, Sugary Cereals and Oreos. The rest of his intake included some vegetables, protein drinks and a multi-vitamin. 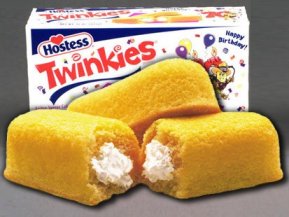 The weight loss wasn’t surprising, since he limited himself to 1800 calories per day on his “Twinkie diet,” which was part of a class experiment.

What surprised most people was that his health indicators (HDL cholesterol, LDL cholesterol, triglyceride) got better, not worse. What now? Should we trade in our fruits and veggies for ding dongs?

Since CNN reported on Professor Haub’s experiment earlier this week, the blogosphere has lit up with some (very divided) commentary.

Haub’s experiement, which he documented on his facebook page, has been drawing ire from the natural health, nutrition-fanatic, anti-junk food crowd who say the experiment was irresponsible and that publicizing the results is sending the wrong message. They’re saying, “It’s about nutrition and food quality above all else!”

On the other hand, it drew responses of “no duh” or “nothing new” from other people who claim that “It’s about calories in versus calories out above all else.”

Haub’s hypothesis: it’s the calories that matter for weight loss. His results certainly support that.

Ironically, people on both sides of the argument are right and wrong at the same time. The way people have interpreted these results and they way they’ve gotten so riled up about this makes it clear to me that most people STILL don’t get it.

This is simply a great anecdotal example that weight loss really is a matter of calories in versus calories out. Eat less than you burn and you will lose weight

Obesity is caused by an energy imbalance. Consume more calories than you burn and you will gain weight.

For people in this day and age to deny the truth about thermodynamics in weight loss – a truth which is published in hundreds of nutrition, physiology and exercise science textbooks and thousands of peer-reviewed scientific papers – is unfathomable.

Denying that calories matter in weight loss is like denying gravity (you can ignore it if you want, but the consequences could get ugly).

But such is the power of personal belief systems. People believe in all kinds of weird things about health, food and weight loss, which they sometimes defend with religious ferocity.

All over the world, we still see people swear that obesity is caused by ____________ (fill in the blank): hormones, toxins, ph imbalance, inflammation, grains, meat, fat, carbs, or… ITS THE JUNK FOOD!…

Whatever dietary or physiological scapegoat they want to blame it on, as long as it’s…ANYTHING BUT THE CALORIES!

(because it couldn’t be as simple as that… could it?)

Does junk food contribute to obesity? Sure it does – because it’s calorie-dense and easy to over-eat, (and some argue, addictive), especially the high fat plus high sugar combination, and especially liquid sugar in the form of soda.

But that brings us full circle to calories in versus calories out doesn’t it? If you eat foods that easily lead you into a surplus, you get fat. It happens whether the foods are “clean” or “unclean”, whether they are protein, carbs or fat, animal-based or vegetarian.

The idea that eating all natural, nutrient-dense food is all it takes to achieve weight loss is incorrect. You can eat all the natural, unprocessed, organic, “clean” food you want, but if you overeat (into a surplus) you will still gain fat.

So should we follow the professor and adopt the Twinkie diet, knowing that you can lose weight on a low calorie junk food diet?

No, of course not. That’s NOT what I’m suggesting at all. Nutritional quality is extremely important for health, energy, longevity, vitality and mental acuity. The long term consumption of artificial, processed food will eventually lead to health problems of one type or another. With sugary junk foods, I’m particularly concerned given today’s epidemic of diabetes and metabolic syndrome.

Why didn’t Haub get sick?

There are some simple possibilities for why this nutrition professor may not have seen decrements in his health markers:

1. This was a short term experiment. Long term results may be much different.
2. Losing weight – by itself – leads to improvements in health, ie cholesterol, blood pressure, etc.
3. It appears that Haub didn’t take a full panel of health measurements, only a few which are highly responsive to weight loss.
4. Some people are pre-disposed to react badly to dietary fat and especially sugar, while others are not. Perhaps Mr. Haub was one of the luckier ones in the genetics department.

On the other hand, if his junk food eating had lead to a calorie surplus and he gained weight, which is very likely to happen in free-living (especially sedentary) individuals who aren’t carefully tracking calories like Haub did, his health markers would have gone down the sh*tter.

Here’s the problem: with the media circus that this stunt has created (even people like Rush Limbaugh have chimed in), I agree that people could misinterpret this story/experiment as free license to eat anything. In fact, that is the exact message I’m seeing all over the web among bloggers and commenters.

The media typically does a poor job reporting on these types of things – journalists are usually not fitness/nutrition experts. But there are actually some (otherwise) very smart people using Haub’s experiment as proof, to support their belief that all you have to do is get your calories right and get your macronutrients (protein, etc) right and after that, anything goes – eat what you want.

I think it’s fair to say that Haubs’s experiment supports the idea that you don’t have to be a health food fanatic. It’s ok to enjoy the foods you want and relax your diet a bit… but not too much!

When I see the kind of dichotomous thinking that suggests its either calorie quality OR calorie quantity that matters, I know that people on both sides of the issue still have a long way to go in understanding the cause of obesity and the relationship between weight loss and health.

On top of that, it’s alarming how few people are discussing the importance of body composition versus weight loss. The macronutrient ratio and nutritional quality of your diet – particularly in combination with training – can affect what kind of weight is lost – fat or muscle.

What should we make of all this? Let me sum it up for you:

Food QUANTITY for weight management…food QUALITY for health and vitality… You’d better get BOTH of them right if you want to be lean AND healthy for life.