For years, concerned consumers and watchdog organizations have been screaming that the U.S. labeling laws are full of loopholes and in need of serious revision. After years of talk, the Food and Drug Administration (FDA) says they’re planning to so something about it. But will it be enough?There are many food labeling issues we could complain about, but one of the biggest problems (due to its direct relationship to the obesity crisis) is serving sizes.

I’m not just talking about supersizing. What’s worse is that the actual calories are being disguised with serving size sleight of hand. 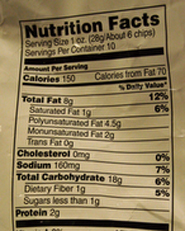 Let me show you some examples:

Tostitos touch of lime. Calories per serving 150. Not too bad for tortilla chips eh? Not so fast. Check that serving size. 1 ounce. That’s 6 chips. There are 10 servings per container. That’s 1500 calories in the bag.

Most guys could knock off half that bag for a cool 750 calories. Ok, suppose you have some restraint and you only eat a third of the bag (20 chips). You still get 500 calories. But who stops at 6 chips?

Vitamin Water. While I could rant about how sugar water is being marketed as health food, I’ll stick with the serving size sleight for now.

Excuse me, but is there ANY reason for making it 2.5 servings other than to disguise the actual calorie content?

When you see that the entire bottle is 20 ounces, you realize that it contains 125 calories, not 50. Although 20 ounces is a large bottle, I don’t know many guys who wouldn’t chug that whole thing.

It says 90 calories and 480 mg of sodium per serving. Wow, less than a hundred calories. Wait a minute though. Turn the container around and you see the serving size is 1 cup and the servings per container says “about 2.”

Huh? It looks pretty obvious to me that this microwave-ready container was designed for one person to eat in one sitting, so why not just put 180 calories per container on the label (and 960 mg of sodium). I guess 90 calories and 480 mg sodium sounds… well… like a healthier choice! 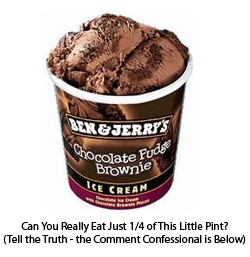 This infamously delicious ice cream with its own facebook fan page has 270 calories per serving.

We all know ice cream is loaded with calories and should only be an occasional treat, but 270 calories per serving, that’s not too terrible is it?

Look a little closer at the label. The serving size is ½ a cup. Who eats a half a cup of ice cream? In fact, who hasn’t polished off a whole pint by themselves? (the “comment confessional” is below if you’d like to answer that)

According to Ben and Jerry, there are 4 servings in that one pint container. 270 calories times 4 servings = 1080 calories! That’s about half a days worth of calories for an average female.

I could go on and on – crackers, chocolate chip cookies, muffins, pasta, boxed cereals (who eats ¾ a cup of cereal), etc. But I think you get the point.

What’s the solution to this mess? News reports in the last week say that the FDA may be cracking down. Count me among those who are pleased to hear this news. One of their ideas is to post nutritional information, including the calories, on the FRONT of the food labels.

The problem is, this move by itself could actually make matters worse. Suppose Tostitos started posting “150 calories per serving” right on the front of the bag. Most people would assume the chips were low in calories. Putting calorie info on the front of the label would help only if it clearly stated the amount of calories in the entire package or in a normal human-sized serving!

Ah, but the FDA says they’re on top of that too. They also want to standardize or re-define serving sizes. Sounds great at first, but critics say that consumers would take it as approval to eat larger servings so the strategy would backfire.

Suppose for example, the government decides that no one eats ½ a cup of Ben and Jerry’s so they make the new serving size 1 cup, or half the pint-sized container. Now by law the label says 540 calories per serving instead of 270. Is that like getting official permission to eat twice as much?

I’m not against the FDA’s latest initiative, but what we really need is some honesty in labeling.

Food manufacturers should not be allowed to manipulate serving sizes in a way that would trick you into thinking there are fewer calories than there really are in a quantity that you’re likely to eat.

It would be nice to have calories for the entire package listed on the label at a glance. A new rating scale for caloric density would be cool too, if it could be easily interpreted. It would also be nice to have serving sizes chosen for quantities that are most likely to be commonly eaten. But standardization of serving sizes for all types of foods is difficult.

My friends from Europe tell me that food labels over there are listed in 100g portions, making comparisons easy. But when you consider how much each individual’s daily calorie needs can vary (easily 3-fold or more when you run the gamut from totally sedentary to elite athlete, not to mention male and female differences), standardization that applies to everyone may not be possible.

I think the recent laws such as requiring calories on restaurant menus are a positive move that will influence some people’s behavior. But no label changes by themselves will solve the obesity crisis. A real solution is going to have to include personal responsibility, nutrition education, self-discipline, hard work and lifestyle change.

Changes in the labeling laws won’t influence everybody because the people most likely to care about what labels say are those who have already made a commitment to change their lifestyles (and they’re least likely to eat processed and packaged foods – that have labels – in the first place). Actually, for those who care, all the info you need is already on the labels, you just have to do a little math and watch out for sneaky label tricks.

There’s one true solution to this portion distortion and label lies problem: Become CALORIE AWARE. Of course that includes educated label reading, but it goes much further. In my Burn the Fat, Feed the Muscle system, here is how I define “calorie counting”:

2. Always have a daily meal plan – on paper – with calories printed for each food, each meal and the day. Use that menu as a daily goal and target.

3. Educate yourself about average caloric needs for men and women and learn how to estimate your own calorie needs as closely as you can based on your activity, weight, body composition, height, gender and age.

4. Get a good kitchen food scale and use it.

Keep counting calories and doing nutrition by the numbers until you are unconsciously competent and eating the right quantities to easily maintain your ideal weight becomes second nature.

Obviously, saying that calories are all there is to nutrition is like saying that putting is all there is to golf. Calorie quality and quantity are both important. However, it’s a mistake to ignore the calorie quantity side of the game. Serving sizes matter and even healthy foods get stored as fat if you eat too much..

You can play “blindfolded archery” by guessing your calories and food portions if you want to. Hey, you might get lucky and guess right. Personally, I wouldn’t recommend depending on luck – or the government – for something as important as your body and your health. I would recommend the personal responsibility, nutrition education, self-discipline, hard work and lifestyle change…