The New York Times recently ran a feature titled, “Bodybuilders See Kidney Damage With Steroids.” These stories surface in magazines and newspapers on a regular basis, and many people in the hardcore bodybuilding community are quick to dismiss them as “uninformed, anti-steroid propaganda.” This one however, raised some eyebrows because it not only described the personal plight of several top pro bodybuilders and strongmen whose careers were cut short by kidney disease, it also cited new research that was just published in a top nephrology journal. According to the author, this study was among the first to claim a direct link between long-term steroid use and kidney disease. 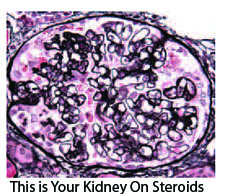 If you’ve watched movies like Bigger, Stronger Faster or surfed some of the bodybuilding boards online, no doubt, you’ve heard hardcore bodybuilders defend steroid use. Supporters claim that steroids don’t cause any serious health problems, only relatively minor side effects which can be easily managed.

Because of their status as controlled substances, steroids are usually purchased on the black market, so the buyer does not always know what he or she is taking. The drugs are self-administered, often at the advice of the dealer or local gym drug guru. Some bodybuilders take them for years. Almost all bodybuilders use multiple drugs. Many are not using drugs, they are abusing them.

With the assistance of chemicals, pro bodybuilders today are continually setting new standards, pushing the envelope on muscle mass, many of them crossing the 300 pounds barrier.

As such, it would be extremely naive to think that steroids are not without more serious risks than mere gyno, acne and testicular shrinkage.

Non-natural bodybuilders don’t just use steroids, they often use a cocktail of drugs including, but certainly not limited to growth hormone, insulin, cytomel, clenbuterol, DNP, and one which perhaps is more responsible for kidney problems than steroids – diuretics.

I am not a doctor or an expert on steroids or performance enhancing drugs. However, I do have theory about why we keep hearing about bodybuilders and kidney problems.

What about the combination of steroids, very high protein diet, unusually high muscular bodyweight, extremely low pre-contest body fat, precontest dehydration and diuretics….could that be a veritable PERFECT STORM for a kidney malfunction or other health problem – even in the absence of genetic predisposition?

Add previous medical history or heredity into the mix and using the standard precontest drug cocktail might be nothing short of playing with matches while doused in gasoline.

How much each one of these factors contributes to the kidney dysfunction, I have no idea, but for those who claim that it was only the high protein or diuretics or genetics might want to know that the new study says there are potential direct nephrotoxic effects of anabolic steroids.

I thought this recent Times story was interesting, and so was the new study, so I wanted to share them with you. The Times story included quotes from bodybuilding luminaries such as Ken “Flex” Wheeler, King Kamali, and Bob Cicherillo. It also featured an interesting video by Patrick Antonecchia, who ended his steroid use and career about a year ago after diagnosis of kidney disease.

The research paper was published in the Journal of the American Society of Nephrology and was conducted at Columbia University. The abstract of the paper can be read on Pub Med at: http://www.ncbi.nlm.nih.gov/pubmed/19917783.

I read the full text of the study. The “Index patient” in the study suffered from focal segmental glomeruloscelrosis, a form of kidney disease. They showed his photo (body) in the journal full text and his physique was clearly that of a pro competitor (nearly 300 lbs). His profile was as follows:

Some people might figure, yeah, this is just a rare case study – and it was in fact just a case study. But there were 10 subjects in the cohort and it was published in a peer-reviewed journal.

Most of us in bodybuilding have heard “locker room talk” about kidney problems and drug-using competitive bodybuilders for decades. More anecdote, Yes I know. But I haven’t just read about this. I’ve seen it.

A friend of mine, earlier this year, was forced to end his bodybuilding career after he was rushed to the hospital – on the day before his contest – with kidney failure. Thank God he recovered without permanent damage. But his doctor, who said she had seen many bodybuilders in her emergency room before, told him he had to quit the steroids… And competition. Forever.

It hits you quite a bit harder when it happens to someone you’ve known for years – someone who had no known genetic predisposition for kidney trouble, no medical history and who claimed to be very careful about his usage. He was also under 200 pounds.

What does it take for the bodybuilding community to start to rethink this?