3 Hormones you MUST Address for Fast Fat Loss

It seems like most fat loss programs focus on one main thing: to burn fat, you have to expend more energy than you take in. Such a focus makes sense of course, because if there is a universal truth to fat loss, that’s it. This is what we call “energy balance.” In order to lose fat, you have to create what we call “energy debt” or “energy deficit” that is, eliminate the balance and instead be on the negative side of the balance scales.Of course, that works very well for “beginning” fat. However, success doesn’t last forever.

As anyone who’s ever been on a diet and exercise program of any kind can tell you, at first it’s pretty smooth sailing. Eat less, do more, lose fat.

And then it stops! And as those same people can also tell you, it usually stops suddenly. 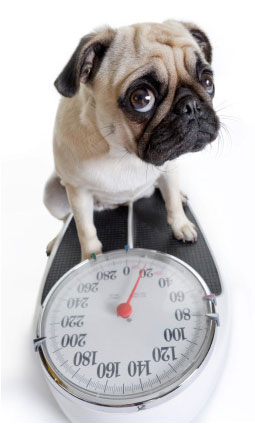 Of course, the first instinct people have is a very natural one…to simply do more of what was bringing them success in the first place.

So they eat even less and do even more.

You see, what these people fail to realize (and what most fat loss programs fail to address) is…

After a certain point, simple energy deficit no longer covers the tab.

It becomes more about what type of deficit.

Speaking generally, you actually have to eat closer to maintenance calorie levels (instead of far below) and expend more Calories through exercise.

Even then, things don’t always happen as quickly as you want.

You see, once you’ve hit a fat loss plateau or when you’re trying to lose the last few pounds (like I was when I was dieting for the beach house), fat loss becomes less about energy balance a more about hormones.

You see, some hormones, such as Leptin, actually control the majority of your general fat loss efforts and all of the factors thereof: appetite, satiety, “starvation mode.” However, assuming you’re eating enough and trying to create an energy deficit through training, Leptin isn’t the issue.

In Final Phase Fat Loss though, you’re never on a severe diet, so you don’t have to worry about Leptin.

There are other hormones however, which are a bit more insidious in their effects on your physique. They don’t just determine IF you gain fat – they determine where you gain it, and whether you’re able to lose it from those areas.

Those “problem” areas on your body are there for a reason.

“Problem areas” are created by your hormonal environment, and it’s your hormones that force your body to have particular fat storage patterns.

In this article, we’re going to talk about the three most common types of regional fat storage, and the hormones that cause them.

Back Got Back: Low Body Fat Storage

One of the most common types of fat storage that we see in women is the “pear shape” – fairly thin on top but heavy on the bottom (and IN the bottom, if you know what I mean).

High levels of estrogen are awesome for enjoying Grey’s Anatomy and makin’ babies, but terrible for fat loss – which is why women usually have more trouble losing fat than men.

However, anyone, male or female, with high estrogen levels will have trouble losing fat, especially from the lower body. In essence, the higher your estrogen levels, the greater the likelihood you’ll store fat in your lower body; mainly in the hips and thighs.

And yes, it IS possible for men to have high estrogen levels. Unfortunately, outside of having to deal with a declined rate of fat loss and lower body fat, these guys ALSO have to deal with the ignominy of man-boobs.

On the whole, estrogen related fat storage is a pain in the ass (get it!?) but it is not completely unmanageable. You see, you can offset this phenomenon with certain types of training.

No worries, ladies (and gents!), I’m here to help.

In addition to helping you lose fat stored in the lower body, these specifically designed workouts will also be great for fat loss in general. Essentially, they’re great for burning calories and for shedding lower body fat through estrogen management. Combine the two and the result is rapid fat loss, with a heavy concentration on lower body fat stores.

Muffin Tops: No Love for the Love Handles 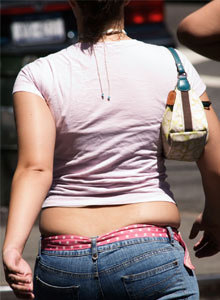 Probably my least favorite incarnation of regional fat storage is love handles and lower back fat. This is, of course, because I personally suffer from such.

Even when I am in lean condition – I’m talking shredded pretty much everywhere else – I store some fat in my love handles and lower back. It used to take me an extra 3 weeks to get rid of it!

The reason I tend to store fat this way is because of how my body reacts to certain hormones, and because of the effect those hormones have on fat storage.

On top of making me fat in that immediacy, it also completely had a pretty negative effect on the way my body processes and handles insulin period.

The degree to which you are able to process and respond to glucose (sugar) in your body is called insulin sensitivity. The higher this is, the easier and more efficiently your body utilizes carbohydrates for energy, and the less like you are to store carbs as fat.

On the other hand, insulin resistance is the opposite; you don’t deal well with carbs. And anything other than a low carb diet pretty much means you’re gonna hang on to some fat.

I’m sure many of you out there who have been heavy before are experiencing much the same problems that I used to have.

The good news is that insulin resistance (and the resulting regional fatness) can be mitigated with certain types of training. For example, with careful planning and selection of exercises, you can start to whittle away at your love handles and lower back fat while you increase insulin sensitivity.

The better news is that I’ve figured out a specific series of training sessions that will do just that.

The One, the Only: Belly Fat 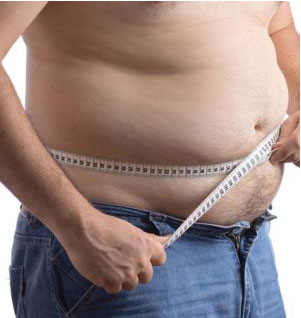 Without question, the most common type of regional fat storage is belly fat. If this isn’t you, it’s someone you know.

Abdominal fat storage obviously has a lot to do with your diet and overall body fat level; that should be obvious but it never hurts to touch on it.

Outside of that, it’s hormones baby, hormones.

The one we’re talking about here is cortisol. This hormone has been in the media a lot in the past few years, and I’ve talked about it a bit, so by now you know that cortisol is sometimes called a “stress” hormone.

That moniker is more appropriate than you know.

Basically, that means your body will produce cortisol (and encourage belly fat storage) under conditions of nearly any type of stress – both emotional and physical. So to combat cortisol, it’s not enough to just get more sleep or stop drunk dialing your ex-girlfriend (although that helps, I’ve heard).

Instead, it is of far greater effect to combat cortisol through resistance training.

Now, if you’re observant, you may have noticed what seems to be a contradiction.

As I said, cortisol is also produced through physical stress. In fact, training is actually one of the primary means through which your body will produce this sneaky little hormone.

Additionally, because cortisol has been linked to overtraining and has a catabolic (muscle wasting) effect, producing too much of it through training is certainly counterproductive.

It’s important to note, however, that long duration cardio and extended lifting sessions are what produces the most cortisol, and I always recommend against those.

Instead, short, intense training sessions using a particular type of training modality will help to counteract the effects of cortisol; both the muscle-wasting effect and the cortisol related belly fat storage.

Are you ready to fight these hormones?!

If so, click * HERE * to learn more and find out about using specific types of training to combat the nefarious three hormonal nemeses by producing hormones that offset the effects of estrogen, insulin, and cortisol.

So, what are you waiting for?

John Romaniello is the founder of Roman Fitness Systems and the creator of theFinal Phase Fat Loss Program.As a trainer, coach, author and model my articles and pictures have appeared in some of the mostrespected health and fitness publications in the world.

Author, coach, and self-professed pretty-boy John Romaniello runs Roman Fitness Systems with a
tongue-in-cheek approach to fitness–and himself–that shows a genuine love/hate relationship
with both. Equal parts narcissism and self-loathing, Roman writes with passion and humor,
show-casing his belief that training doesn’t need to be the serious, stern, science-laden
monotony that is pervasive in this industry. John is also the creator of a new fat loss
system called Final Phase Fat Loss: the last word on the last 10 pounds!