You may have heard (or realized!), that it’s more difficult for women to lose fat than men. Differences in male and female hormones are certainly involved – both in the fat loss process as well as in the patterns of fat storage on the body.But the biggest obstacle is NOT hormonal issues, it’s one little fat loss relativity factor that almost all women overlook…That factor is the simple fact that women are usually smaller and lighter than men, yet they err by setting their goals and designing their nutrition plans like men or larger women.

Case in point: Last week I received an email from a female reader who told me she was doing 4 weight training and 6 cardio sessions per week and the cardio was 45 minutes at a clip.

She said she weighed 101 lbs (46 kg) at 4 feet 11 inches tall, but even though she was petite, she had “several pounds of flab” she wanted to lose and just felt kind of “mushy.”

She had been really inspired by the success stories on the Burn the Fat websites, especially the finalists in our Burn the Fat transformation challenge.

But she said she was starting to get discouraged because she was losing so much slower than everyone else, it seemed. Some weeks the scale didn’t move at all. 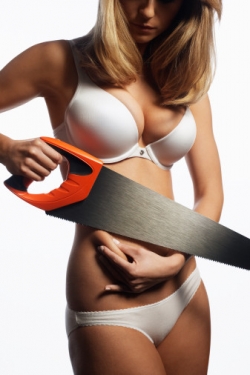 At 2640 calories per day, I’d drop fat rather painlessly. If I bumped up my calorie burn or decreased my intake by another 340 a day, that would be enough to give me 2 lbs per week wt loss.Either way, that’s hardly a starvation diet (Ah, the joys of being a man).

For smaller women, the math equation is very different.

Daily maintenance level 1970 calories (even at a VERY active exercise level).20% deficit would = 394 caloriesOptimal intake for fat loss 1576 calories a day On paper predicted fat loss only 8/10th of a lb of fat loss/wk.

That’s pretty low in calories. However, you would still have a fairly small calorie deficit. In fact, I would get to eat almost twice as many calories (2600 vs 1300 per day) and I’d still get almost twice the weekly rate of fat loss!

I know, this isn’t “fair,” but it doesn’t mean women can’t get as lean as they want to be. It means that on average, women will drop fat slower than men. It also means women with small bodies will lose fat more slowly than larger women.

What to do about it?

#1: Set a goal that’s realistic relative to your gender, body size and weight. ONE POUND a week of fat loss is much more in line with a realistic goal for a small-framed female. Overweight people can lose it faster. Men can drop it faster.

#2: Weigh and measure all your food any time you feel you’re stuck at a plateau, just to be sure. When your calorie expenditure is on the low side, you don’t have much margin for error. One extra pastry, muffin or handful of cookies and ZAP, your little 20% calorie deficit is GONE!

#3: Remember that body fat and body weight are NOT the same thing.Judge your progress on body composition. (I teach how to measure your body fat and lean body mass in the privacy of your own home in my burn the fat program at www.burnthefat.com)

Dropping only ONE pound per week (or less) may seem excruciatingly slow, but even if you get a HALF a pound a week fat loss, that’s still progress. Celebrate it. Keep that up over time, and you will reach your goal. Persistence pays.

For further readin I suggest you take a look at my Burn the Fat Program. Not only was Burn the Fat developed based on male AND female “physique athlete” methods, Burn the Fat is the only program that targets the 5 areas above:

* Goal setting is taught in DETAIL, including how to customize the goal

* The calorie math is explained in depth for men and somen

* You learn how to measure body composition

* You learn how to apply cardio AND weight training to achieve maximum caloric burn while developing the kind of muscle you want: A little “tone” or actually adding some muscle right where you want it.