Is Junk Food as Addictive as Heroin?

The theory of food addiction is getting tons of press lately. I think it’s partly because of popular new books like David Kessler’s The End of Overeating, on top of a whole slew of earlier books about sugar addiction. There has also been a lot of hyped-up media reporting on the latest research, with headlines suggesting that “Junk food is as addictive as heroin” or “Hormones turn hungry people into junkies.”I don’t believe that food is addictive in the same way that drugs are addictive, but there are definitely some parallels. Drug addiction and food intake involve some of the same neural systems, so lessons could be learned about certain types of obesity by studying drug addiction research.junk-food-addiction

The foods most often associated with addiction are sugary, fatty and salty foods. Coincidentally, that combination is what makes food highly palatable and energy dense. It tastes good (so we like it!), which makes it easy to eat a lot of it, which can contribute to obesity. 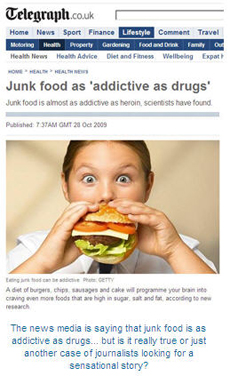 Some experts have been claiming for years that sugar can be addictive. It’s only fairly recently that researchers have studied the brain neurochemistry in a lab controlled situation and come to some somewhat strong conclusions. In 2008, researchers from Princeton University published their findings from a series of rat studies in the Neuroscience Biobehavior Review. They concluded:

“Food is not ordinarily like a substance of abuse, but intermittent bingeing and deprivation changes that. Based on the observed behavioral and neurochemical similarities between the effects of intermittent sugar access and drugs of abuse, we suggest that sugar, as common as it is, nonetheless meets the criteria for a substance of abuse and may be “addictive” for some individuals when consumed in a ‘binge-like’ manner. This conclusion is reinforced by the changes in limbic system neurochemistry that are similar for the drugs and for sugar. The effects we observe are smaller in magnitude than those produced by a drug of abuse such as cocaine or morphine… Nonetheless, the extensive series of experiments revealing similarities between sugar-induced and drug-induced behavior and neurochemistry lends credence to the concept of ‘sugar addiction.'”

Most people don’t need a new study to tell them that they crave specific foods at times. Cravings and occasional lapses of overeating are a real and persistent challenge to dieters and it’s clear that food can be used or even abused for reasons outside of physical hunger and nutrition, for pleasure or to “medicate emotions.” Most people would also agree that eating a lot of sugary food can sharpen your sweet tooth so sugar consumption begets more sugar consumption. But is the desire for sugar or comfort foods the same as being addicted to alcohol or even heroin or is that comparison taking it too far?

Even if the way some people consume sugar or junk food meets some of the diagnostic criteria for addiction, it’s my belief that it’s not beneficial to perpetuate the idea that food is addictive in the same way as drugs. I think we should leave it at admitting that we sometimes struggle with overeating – for a wide variety of reasons, only one of which is neurochemical – and describe the wanting of certain foods as “cravings” not addictions, if for no other reason than to give it less emotional power.

An important first step in solving any problem is admitting that you have one. But there’s a big difference between saying, “I sometimes overeat” and “I am a food addict.” The former is describing a behavior, the latter is describing a person, and a behavior is a lot easier to change than a person. If you say “I am a sugar addict” that may also encourage some people to buck responsibility and take an “I can’t help it” type of attitude, similar to the way some people play the “genetics are keeping me fat” card.”

The research is showing that there’s definitely something going on chemically and neurologically with dopamine, opiods and the reward and pleasure systems of the brain when sugary or sugary and fatty foods are eaten. Even genetics play a role, leaving some people more susceptible, as some obesity genes appear to act on reward circuitry.

(On a slight tangent, consider that addictive personality behavior types might also have a genetic component. Obesity researcher Claude Bouchard at the Human Genomics Laboratory has also proposed a “hyperphagic” genotype: a person who has genetically inherited a propensity for poor regulation of appetite and satiety and a propensity to overfeed).

However, there’s also research that says you can control food cravings and curb calorie consumption with behavioral and psychological restraint strategies. Obesity is the result of a combination of biology, behavior and environment, not just genetics or a stew of brain chemicals gone awry.

It’s important to learn and develop a set of strategies for what to do when you feel cravings and understand that you don’t have to give in to them just because you experience them. Part of the solution is having some rules about how flexible you’ll be in your approach. Somewhat paradoxically, and with only a few exceptions, allowing yourself to give in to your cravings is generally more effective than total abstinence. That means for most people, permitting a certain number of free meals each week or setting a compliance rule, and learning how to enjoy your favorite foods – infrequently and in moderation.

It also pays to avoid overly restrictive diets in favor of the slow, steady, moderate approach to weight loss. Crash diets and rapid weight loss programs have downsides for anyone but they are an especially bad idea for people susceptible to cravings or addictive-like eating behavior. Periods of deprivation are often followed by the “boomerang” of overeating or bingeing. Eating on a regular schedule, preferably with 5-6 small meals per day, or with healthy pre-planned snacks between meals, is an ideal meal plan for helping to control cravings and decrease hunger.

Stress management strategies are critical. Stress is a major cause of relapse in former drug users and stress can be a prime cause of diet failure and weight regain. The brain centers that regulate appetite are all stress sensitive and one long standing theory of hunger says that eating comfort foods can become a conditioned response to stress.

Setting up a social support system and controlling your environment by removing as many triggers and eating cues as possible can help as well. Visual cues alone can trigger a food craving so when someone says, “I can’t help myself, I eat everything in sight,” part of the solution is contained right within that complaint – get the junk out of your sight.

Granted, that’s impossible to do completely in our modern society. Being surrounded by temptations and triggers is a major contributor to the obesity problem today. But you do have a remarkable amount of control over your own home and personal environment, so don’t make it any worse than it is by keeping junk around. I’m writing this on November 1st. I wonder how many people have leftover candy from Halloween who haven’t thrown it away yet.

I also recommend borrowing techniques from fields such as Neuro-Linguistic Programming and cognitive psychology so you know what to say to yourself when you get cravings (Check out my own book, The Body Fat Solution, Dr. Judith Beck’s The Beck Diet Solution and Anthony Robbin’s books as some good starting points. It’s possible to literally talk yourself out of inappropriate eating – and by the way, this is one of the many differences between humans and rats, so we should be careful not to read too much into the rodent research that keeps getting quoted in all these sensational media stories.

It’s true that there are biological origins of food cravings, so you shouldn’t feel weak or guilty about wanting certain foods – it means you’re human. What really matters is how you respond to those urges and knowing that ultimately, you are in control.

The neurobiology of appetite: hunger as an addiction, Dagher A, International Journal of Obesity, 22: S30-S33, 2009. McGill University, Montreal, Quebec, Canada