The Truth About Ephedra And Ephedra-Free “Fat Burners” Finally Revealed By Someone Who Does Not Sell Them! If you’re thinking about taking fat burner supplements or if you’re simply looking for information about fat burners, then what you are about to read on this web page may hit you by surprise. (Actually, it may hit you like a ton of bricks!)DO NOT spend another cent on “fat burners” until you read this! This information is urgent to your financial as well as physical health and well being.

I guarantee that the TRUTH about fat burner pills and the advertisements that sell them is going to shock you, stun you and outrage you, especially if you have been spending large sums of money on these products. 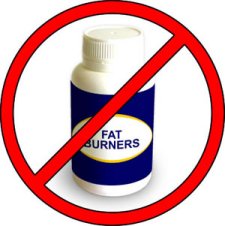 Please do not take my word for it either. Read this short article. Reflect on what you have read and then YOU make the call. I welcome hearing your feedback after you have digested this information.

This expose is based on the 12 part mini-course, “BIG FAT LIES” which was originally written in 2002 -two years before ephedrine was taken off the market. BIG FAT LIES has been downloaded over one million times since its release. In 2007 it was converted into an e-mail mini course. This lesson on fat burners was the most popular, controversial and commented on part of that course.

THE BIG FAT LIE: “You need supplements or fat burners to get lean”

The most popular of the “fat burner” supplements ever on the market were no doubt ephedra or ephedrine-based products, which hit the shelves in 1993.

Ephedrine was immensely popular because there was actually some good scientific evidence showing that it had measurable fat burning effects.

You could also “feel” it… you got an “energy buzz.”

Ephedrine is a drug derived from a plant (a Chinese herb) called ephedra (also known as ma huang). It is similar in chemical structure to amphetamines and works as a “beta-adrenergic agonist” – which means, in plain English, that it’s a thermogenic (metabolism- stimulating) agent that helps with the release of stored body fat.

So if it worked, why did it get banned by the FDA and taken off the market in April of 2004?

Well, there were clearly some political and financial agendas involved, But the reason given to the public was concern about adverse affects and safety.

To this day, the decision to remove ephedrine from the market is still controversial because the research was mixed on whether the risks were severe enough to warrant the ban.

PROBABLY SAFE WHEN TAKEN AS DIRECTED, BUT…

Although the FDA had 80 ephedrine related deaths and 1400 adverse effect complaints on file, including strokes, coronaries and seizures, the fact is, when compared to deaths caused by prescription drugs and other over the counter drugs like aspirin, ephedra actually appeared fairly safe when used as directed by healthy individuals and not abused.

However, one huge downside of ephedrine that was not often mentioned by the pro-ephedrine camp is that stimulant-based fat burners can be highly addictive. Addiction leads to improper use or abuse.

In the early and mid 1990’s, I used ephedra products myself because they were legal, over the counter and at the time, they were not banned from the natural bodybuilding competitions I participated in.

Research be damned, I never believed that these pills helped me all that much with fat loss.

But what I did notice was the “rocket-engine” stimulant boost – the buzz, The pounding heart rate, the increased physical energy, and the amplified mental focus and workout “intensity.”

At the height of the craze, 12 to 17 million people were using ephedra and no doubt, many of them were hooked on what was essentially a mild form of legal speed.

These products were being abused en masse as “pick me ups.” Students were popping these pills to stay awake and study all night. Partiers were doing the same. So were truck drivers.

Like any addictive habit, it’s difficult to stop. When you first go cold turkey, you crash emotionally and physically and your workouts suffer as your crutch has been taken away. I suppose it’s a lot like trying to kick the booze or cigarette habit. You go through withdrawal.

WHAT GOES UP MUST COME DOWN

Your body is too smart for short term quick fixes to ever work because your body will always fight back to maintain a natural balance or “homeostasis.”

For every artificial peak or high you create, there will be an equal or greater valley or low point.

If you over-stimulate, your body can respond by slowing down your natural metabolic rate to compensate. As a result, when you stop using the stimulant, your metabolism is slower than ever and you gain back any weight you lost and more.

This often prompts you to go back on the stimulants and the vicious cycle of stimulant addiction continues. Some experts say that long term use can even lead to adrenal burnout.

So even if there aren’t any serious coronary or health risks from proper use, there is the risk of irresponsible use and the risk of addiction and dependency on “fake energy.” just remember, what goes up, must come down. If you borrow energy you will eventually have to pay it back.

When the FDA finally pulled the plug on ephedra, supplement companies scrambled like crazed maniacs to come out with “ephedra-free” formulas for their “fat burners” as they anticipated the imminent doom of their multi-million dollar cash cows.

“The next generation of thermogenic technology!”

The great irony is that most of the fat burners currently on the Market today are completely worthless. At best they provide a watered down, unproven substitute for ephedrine and a slight buzz (most are loaded with caffeine).

Or, they may provide some mild appetite suppression. But NONE of these so called “next generation fat burners” are the “miracles” that the advertisements say they are.

Bodybuilding industry columnist Will Brink put it this way,

“The explosion of ephedrine-free weight loss products was more a function of market pressure vs being based on any science. Claims by some companies that their new ephedrine-free “fat burners” were equivalent to or even superior to EC based products was wishful thinking and marketing-driven BS.”

But it didn’t matter. Consumers had been hoodwinked with the classic bait and switch. The ephedrine was gone from the formulas, but the brand names remained the same.

In the last year before ephedra was banned, sales had skyrocketed to $1.25 BILLION DOLLARS, according to the Nutrition Business Journal.

The money still continues to pour in at a staggering rate today. To say that money is the main motivation behind the push for diet pills and a fat burners would be the understatement of the century.

Most people who aggressively recommend “fat burning” pills of any kind are profiting from their sale and it’s hard to get unbiased information when so much money is at stake.

THE TRUTH: A LEAN BODY DOES NOT COME IN A PILL

It’s a common misconception that you can’t reach your fat loss goals unless you take some kind of “fat burner” supplement.

It’s also a common misconception that you can pop a pill and get dramatic results like you see on TV and in the magazine ads.

The results you see in the ads for fat burners are persuasive, but before and after testimonials are NOT proof that diet pills were responsible for those results.

Not all before and afters are bogus, of course. But many of the legitimate photos are “not typical” and represent the best possible case scenarios, after extremely intense training and strict nutritional regimens.

As for many “miraculous transformations,” the Federal Trade Commission (FTC) And state attorney general’s offices have been exposing them for what they really are… set-ups and outright fakes!

In January of 2007, four diet pill companies you have definitely heard of were sued by the FTC and ordered to pay $25 million in fines.

The reasons: False advertising and no evidence to back up their claims.

San Diego Attorney Todd Macaluso took sworn depositions from several Diet pill before and after models. According to a story in the San Diego Tribune by Penni Crabtree, Los Angeles bodybuilder Mike Piacentino Swore under oath that he was paid to stop working out and to eat ice cream and donuts to fatten him up three weeks in advance of his “before” photo shoot. Then he used his bodybuilding expertise to get back in his usual top shape.

According to an ABC 20/20 expose’, fitness model Marla Duncan said In advertisements that she lost 35 lbs with the help of a popular fat burner pill. However, Jay Nixon, the Missouri Attorney General, found out that Duncan had recently been pregnant and given birth. The “before” photo was taken shortly afterwards. The fat burner pill company settled the case out of court for $100,000 while denying any wrongdoing.

Will you ever look at before and after photos the same again? Do you really want to keep forking over your money to these companies?

AN INTERESTING END TO THE FAT BURNER SAGA…

Diet pills and fat burners are nothing but quick fixes. Every one of them.

Even if they help in the short term, they don’t help in the long term because you are only treating symptoms. Body fat is a symptom of a complex problem with multiple causes including unhealthy lifestyle, poor nutrition, lack of activity and even mental factors like subconscious self-sabotage and emotional eating.

The true solution to any problem, including body fat, is to find the causes and treat them.

After using them for a few years in the 1990’s, and after a lot of research, self-experimentation and personal reflection, I made the decision to dump “fat burning” and “pre workout stimulant” pills down the toilet forever. I then decided that I would no longer recommend these products to my readers and clients.

Since then, I’ve continued my training with no fat burners whatsoever. There has been NO difference in my results and I’ve gone on to win numerous bodybuilding titles.

As a natural bodybuilder today, I routinely reach 4 percent body fat for competitions and maintain my body fat at around 9 percent all year, using my own system of natural nutrition and training – NO DRUGS, NO PILLS and NO FAT BURNERS!

I find the obsession so many people have with taking a pill to lose weight both perplexing and troubling at the same time, especially when you consider that fat loss can be achieved naturally, so simply and predictably with nutrition and exercise methods such as what I teach in my Burn The Fat Program

Spending big money, sometimes $40 to $50 a bottle or even more on pills is even more baffling to me when you consider that even if you get some small fat burning effect from the supplements, it’s nothing you couldn’t get from another week or two of dieting and exercising!

I recommend you take a pass on “fat burner” pills and supplements and learn how to burn fat the way mother nature intended – through proper nutrition, by building more muscle, and by increasing your activity level to burn more calories.

If you’re not satisfied with your results, trust me, it’s NOT because you have a “diet pill deficiency.” IF you’d like to learn how to burn fat naturally – without drugs or fat burner pills – visit the Burn The Fat website.