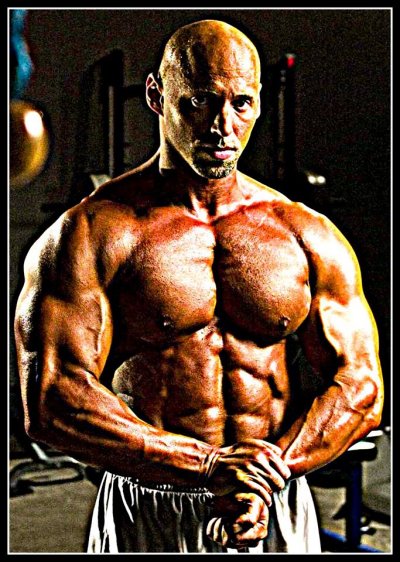 Although I pride myself on having a balanced and even physique, I would still have to say that my pecs are my “standout” body part. In the offseason, I generally wear a size 54 jacket, and only a 34 pant. My jacket size is mostly due to the mass and thickness of my chest more than anything else (which makes me wonder what size jacket Ronnie Coleman or Marcus Ruhl must wear…WOW). Whenever people see me with my shirt off, the majority of questions and comments I get are in regards to my pecs. “How much do you bench? How do you find shirts? Wow, your chest is bigger than my wife’s…and she has implants!!” But I digress…

The interesting thing about the fact that my chest is now my best body part is that when I started training, it was probably my worst! While I only weighed a paltry 125 lbs at a height of 5’11” the first time I touched a barbell, you could still see at least some muscular development in my arms, shoulders, and back. However, my chest was literally flat! I looked like an ironing board with nipples!

So, how did I get my chest to go from minuscule to massive…tiny to titanic… pathetic to powerful? Did I have a special, secret exercise taught to me by aliens from the planet Schwarzeneggeron? Nope. I just did the basics like bench presses, incline presses, flyes, dips, and pullovers. Did I have access to an experimental protein powder developed by Eastern Bloc scientists that caused site specific protein synthesis in the fast twitch fibers of the pectorals? Nope. I just used the same old whey, casein, and egg powders like everyone else.

“Great Eric…enough with the comedy. Just tell us your secret!”

Ok, it’s all about “positioning” my iron-addicted friends! “Positioning? What the heck are you talking about now?” Let me illustrate my point by telling you about a friend I used to train with years ago. Every time we would go through an intense chest workout, doing the same exact exercises, sets, and reps, he would tell me that his shoulders and triceps got a tremendous pump, but that his chest felt like it had hardly been worked. Within the next day or two he would again complain that he was sore as could be in his anterior delts and inner triceps, but felt nothing in his pecs. For me it was the exact opposite! My chest always got incredibly pumped and sore from training it, while my shoulders and triceps seemed barely touched.

Over the years that we trained together my chest continued to grow and grow, while his chest never changed much. However, his shoulders and triceps were developing quite nicely. The strange thing about my friend’s pec-dilemma was that he trained with great focus and concentration; used very tight and strict form; and progressed very regularly in terms of weight lifted in each of his chest exercises. He and I eventually chalked it up his lousy pecs to genetics. We felt that he simply did not have the genetic capacity to build a thick, massive chest.

Then one day, just for the fun of it, the two of us decided to videotape a chest training session when we were both nearing a competition we were preparing for. That day we did bench presses, incline dumbbell presses, flat flyes, and cable crossovers. We did a pretty complete job of taping all of the exercises from a variety of angles and heights. Later on, when we were watching the tape I began to notice something interesting in the way he was performing each of his exercises…something I never really caught onto before while acting as his spotter. On every movement, as he reached the top of the rep, his shoulders were ending up much higher than his pecs. This was making his chest basically concave at the point of contraction. In addition, he was also locking out very hard at the top…but you could see that he was not really locking out the rep by flexing his pecs, but his tris. However, when I examined my own form, I could see that my ribcage remained high throughout each set, while my shoulders stayed down, pressed into the bench.

My friend was effectively turning each of his pec exercises into shoulder and triceps exercises, while I was optimally stressing the chest with each movement. This is what I am talking about when I mention the word “positioning” in regard to chest training. As soon as I pointed out these “form flaws” to my friend he immediately set out to correct it. During his first chest workout using improved body positioning, he could feel a pump and burn in his chest like never before. He also started getting sore in his pecs, which is something he really never experienced. Within a few months his chest started taking on new fullness and shape, and began to quickly match up to his excellent delts and arms.

I urge any of you out there that feel your pecs to be lagging behind to have someone with a good eye examine your form on all of your chest movements. Every day that I am at the gym I see dozens of people with the same form flaws that my friend used to have. What people need to realize is that building a big chest is not as simple as lying on a bench…unracking a bar…and pushing it from point A to point B. No! Each chest exercise, whether it be a bench press, incline press, dip, flye, or crossover requires the exercise to begin before ever even moving the weight!

Here’s how to start properly POSITIONING FOR PECS:

*These same principles apply to dips, crossovers, and seated press and flye machines as well, with the exception of rule one (although the feet should always firmly be planted).

Trust me when I tell you that if you are not used to performing your chest exercises this manner, it will feel awfully strange at first, and you will probably not be able to use the same weights as you normally do. However, with time, you will get used to POSITIONING FOR PECS, and it will become second nature, like driving a car. Also, you will eventually work up to the same poundage as you were using previously. The greatest reward will be the new growth you will quickly begin to see in your chest!

Apply POSITIONING FOR PECS to the chest routines listed below, but don’t be too upset if that tux hanging in your closet never sees the light of day again!