Creatine: Beyond the Confusion – Part II

If you have not read Creatine: Beyond the Confusion – Part I, please do so before you read this article!

The common practice for taking creatine is to “load” creatine for five to seven days, then continue to take a “maintenance” amount indefinitely. For example, most supplement manufacturers recommend 20 grams of creatine be taken in five-gram servings for five to seven days followed by five grams per day after that. The idea is that by taking a larger amount of creatine, you can super-saturate the muscle and increase the total creatine pool. Then all you need is a maintenance serving to keep an elevated level of creatine in the muscle. Loading creatine with 20 grams and maintaining with five grams is the most common recommended protocol and the one that has been deemed safe through longer-term studies. (11) (12)

Another option for gittin’ loaded was presented by Dr. Eric Serrano. Rather than making a “blanket recommendation,” Dr. Serrano bases his method on the body weight of the individual taking the creatine:

Although I have no scientific evidence to prove Dr. Serrano’s system is better, I believe that using body weight and cycling creatine is more beneficial than the standard 20g-load/5g maintenance protocol. Obviously, a 250-pound muscle-head requires more creatine than a 105-pound bikini model. Another reason I prefer Dr. Serrano’s system is that you cycle off and re-load creatine periodically. I can only speak from experience when I say that cycling creatine works better than a simple maintenance of 5g per day. Every time I cycled off, then re-loaded, I noticed an accelerated improvement in performance.

Some people say that loading creatine is just another way for supplement companies to eat out of your wallet. However, studies have shown that supplementing with 3g of creatine for 14 and 30 days provide less muscular retention of creatine than 20g for only five days. (5) (13)

The bottom line is, don’t be ashamed to get loaded now and again.

1. 100 percent pure creatine monohydrate – It’s a white powder (not unlike baking soda) that is basically tasteless and odorless. You can mix it in water, juice, protein shake, etc. Do not, however, mix creatine with a citrus drink. The combination of creatine and a citrus drink may result in some breakdown of the product, converting creatine into creatinine, which is useless to your body.

2. Creatine and sugar (premixed) – What’s the deal with mixing creatine with sugar? A 1996 study showed that ingesting a carbohydrate solution with creatine promoted a 60 percent greater increase in total creatine concentrations in the muscle, compared with taking creatine alone.(14) Sixty percent is a big difference. However, the subjects who took the creatine and carbohydrates were pounding back 93g of carbs four times per day for five days. 93g of carbohydrates is an additional 1,488 calories per day, or 7,440 calories for the five-day experiment. Any way you look at it, that is a good way to get fat. So, if you are going to follow the protocol of this study and suck back four sugar shakes per day for five days, that’s where I would leave it. In other words, if you are not concerned about how big your gut gets in a week’s time, and you want to load creatine, this is a proven method. After the loading period is over, if you wanted to continue with this type of drink, I would reserve the 93g of sugary goodness for your post-workout meal only. Post-workout is when your muscles are begging for sugar like a crack addict looking for a fix. If one were to critically compare this study to commercial creatine premixes, most supplement manufacturers would fall short on the amount of sugar in one serving. Does this make a difference? It’s a good question with no clear answers. The sugar increases insulin, which transports creatine into the muscles. Do you need that much sugar to get the same response? I’ll share with you what I consider a much better alternative later in this section. For now, suffice it to say I have tried many premixed creatine drinks and can say with a great degree of certainty that they do work better than creatine alone. Like I said, though, if you want to follow this protocol, reserve this drink reserved for a post-workout shake, and you won’t have to worry about bustin’ your gut.

3. Creatine and insulin mimicking agents – Agents that mimic insulin, such as Alpha-lipoic acid, have an effect similar to sugar on your body. When you consume high levels of simple sugars, your insulin goes through the roof. The insulin is responsible for getting nutrients (i.e. creatine) to the muscles. So these products theoretically punch up your insulin without the 93g of gut-busting sugar. The concept is fantastic, and I believe they work. A 1998 study confirmed that “insulin can enhance muscle creatine accumulation in humans, but only when present at physiologically high or supraphysiological concentrations.”(15) What this means is high insulin levels need to exist to enhance creatine’s effects. Using insulin mimickers instead of sugar is an area moving to the forefront of “making creatine better.”

So the choice is yours. If you want my opinion (I’m going to give it to you even if you don’t), I would load with a creatine product that has insulin-mimicking agents and maintain with a creatine/protein/carbohydrate drink post-workout. Why? As I said earlier, I will share a better alternative with you. In another recent study researchers showed that consuming a drink containing protein (50g) and carbohydrates (47g) had an equal effect on creatine absorption and retention as a drink containing 96g of carbohydrates alone. (16) So you get the same results with half the sugar and additional protein when your muscles need it. As far as buying premixed creatine sugar drinks, I would save some money and pick up a kilo of 100 percent pure creatine and mix it with something like Gatorade and Whey protein powder. It’s simple and it works. That said, your choices may be different based on whether your priorities involve fat loss, muscle gain, etc. With the above information, you should have no trouble putting together an optimal plan.

Scare tactics, I love to hate them. In January 2001 some very unfounded headlines splashed across newspapers, newsmagazines, and television. They read “creatine, a dietary supplement used by many athletes to increase bulk, could lead to cancer” (Reuters, January 24, 2001). What I find funny how the press gets a hold of a catchy little story about a popular sports supplement and cancer and considers it front page news. However, you don’t hear about the fact that it can help Alzheimer’s patients. Anyway, the story was based on a study by the French Agency of Medical Security for Food (AFSSA). The study made three points:

1. Creatine could be involved in the formation of carcinogenic nitrosamines, under conditions of high concentrations of sugars and amino acids.

– According to the U.S. Council for Responsible Nutrition “These conditions do not apply to oral intake of creatine, and thus allegations of lack of safety for oral creatine cannot be based on this issue.”

2. Creatine could be involved in the formation of carcinogenic agents known as heterocyclic amines from creatine during the charbroiling of meat.

– The Council of Responsible Nutrition responded by saying “The possibility is supported by a large body of scientific data, but is not relevant to oral creatine supplementation… Allegations of lack of safety for oral creatine cannot be based on this issue.”

– This is interesting because the quacks (I mean scientists) cited absolutely zero studies of any kind to substantiate this claim. Nothing, zero, ziltch, zippo. In other words they made it up. If you haven’t caught on yet, THERE IS NO SCIENTIFIC EVIDENCE TO SUGGEST THAT CREATINE IS A CARCINOGENIC.

The Council for Responsible Nutrition summed it up by saying, “The recent press reports on creatine safety were wrong and misleading. The AFSSA report that prompted this negative publicity does not contain any scientific evidence to support a contention that oral creatine might cause cancer.”

The bottom line is that creatine has never been proven in any way to cause cancer. But let me ask you this: how many newspapers, newsmagazines, and television news broadcasts ran the facts about creatine? Hmmm? What can I say, scare tactics must make good news.

Safety and Side Effect

There are surprisingly few side effects with creatine. If you take too much, it may cause an upset stomach, or you may blow a hole in the back of your new track pants. Taking too much creatine may also result in a little extra quality time with your toilet. If you notice an upset stomach, reduce the quantity you are taking and slowly introduce higher levels. Some people have reported cramping while taking creatine. Preventing cramping is simple: Drink more water. You can’t blame creatine for people’s ignorance. Read the label. If it says drink more water, then drink more water.

Creatine is considered a very safe supplement, even under the scrutiny of some longer-term studies. Studies have shown that athletes who took creatine did not experience a greater incidence of injuries, dehydration, cramping, musculoskeletal injuries or gastrointestinal disturbances.(17) Nor did subjects taking creatine experience additional renal stress.(18) That about wraps up the side effects for creatine. When it comes to creatine and safety, don’t pinch your pennies by purchasing the lowest priced product. As with any supplement, impurities can be an issue. That is why I recommend purchasing creatine from a reputable supplement company. My personal preference is a product that uses Creapure creatine. Creapure is the trademark name for creatine monohydrate, produced by SKW Trostberg AG, a chemical and natural products manufacturing company. SKW Trostberg AG is also the patent processing holder and leading manufacturer of creatine products in the world. All material is certified for its top quality and purity. According to present analytical methods, Creapure is also guaranteed to be free of impurities and by-products, including creatinine, cicyandiamide and dihydrotriazine. Other companies such as EAS, Prolab, Labrada and Muscletech, also put out high quality creatine supplements.

As I said earlier, I could go on and on about creatine. I could tell you about how it’s equally useful for women as men.13 I could tell you about the potential benefits for neurodegenerative diseases such as Alzeihmer’s and Lou Gehric’s disease.14 15 I could also tell you how creatine could potentially be beneficial to attenuate age-related muscle atrophy and strength loss. 15 Creatine may also lower the risk of coronary heart disease or cerebrovascular disease.16 However, I didn’t set out to write a book, just a “short” article. Furthermore, most people who are reading this article are more interested in how creatine is going to make them a stronger, faster, more muscular sex machine (I mean athlete). I hope that this article was able to answer some, most, or all of your questions regarding creatine. In reality, however, I have just scratched the surface regarding this incredible supplement. As I said at the beginning of this article, for obvious reasons, creatine “isn’t going away any time soon”. I think it’s plain to see that I am a big proponent of creatine, and it’s a supplement that I confidently recommend. If you are a serious athlete, or even a weekend warrior, it is safe to say that creatine will improve your performance. It will make you stronger, bigger, more powerful, and hey, it just might clear up those herpes that you have been squawking about.

For those of you who contend that creatine is only good for bloated muscles, I hope you get used to losing…and that funky rash.

Curtis Koch is the founder of Club Hard Body, a company dedicated to providing the cutting edge information and instruments necessary to ultimately achieve extraordinary health and fitness. Curtis has authored numerous articles regarding body transformation, sports nutrition and exercise, as well as the wildly popular book “54 Hours to A Rock Hard Body”. To learn more, visit his website located at www.clubhardbody.com 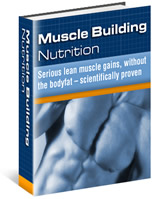