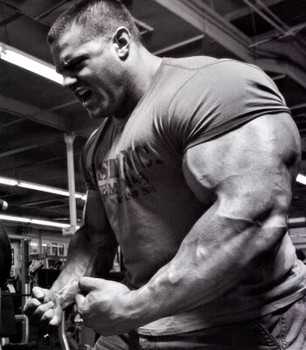 Bodybuilding techniques were developed to compete against the dreaded and feared plateau, the sticking point and/or the proverbial wall. Bodybuilding techniques are basic resistance training regimens designed to specifically increase muscle mass (hypertrophy) as compared to techniques utilized to increase sport specific requisites (speed, balance, coordination, agility, reactivity, flexibility, strength, etc.). Techniques described here involve hypertrophy of the muscle complex i.e. muscle, tendon, ligament, joints, and bones. As you focus on long-term goals, you must prepare the supportive structures to adapt and change as our muscles are continually growing.Currently, a prevalent theory in gyms today is that of Progressive Overload Training or P.O.T. (an appropriate acronym as you will soon see). This theory has its basis is the belief that you need to lift more to get bigger, or progressively overload the muscles to cause them to grow. Without boring you with detail, this theory is flawed. If it were true, you would see 400 lbs. guys in the gym bench-pressing 1500 lbs! Progressive overload training produces diminishing returns, and ultimately can be career ending due to injury! But our body possesses adaptive ability so it will become accustom to anything you do. P.O.T.’s basic problem leads to a plateau, not improvement.

Continually changing the stress placed on the muscle groups prevents adaptation and forces the body to respond. Utilizing a variety of techniques not only breaks monotony in the gym but allows for periods of growth by alternating tissue breakdown (with overloading, heavy exercises, large resistance) and tissue repair (with rest, lighter activities, and various methods).

There are many different terms used to describe the same activity and part I and II of this brief article will include a few of the terms or descriptive titles to describe the different modus operandi. This is not an all-inclusive list. There are obviously a number of other techniques and routines not mentioned in this article, including ones utilized by inventive individuals. A larger collection and more detailed description can be found in a forth-coming book on the synopsis of bodybuilding to be published this summer. (Tune in to this web sight for more information) Please email me with your inventive ideas, I am always looking to learn and design new techniques. Ideally, you will take the ones mentioned and modify them to meet your needs and shock the heck out of your muscles.

The techniques described in paragraph form including the following information:

Name: What the technique is called (occasionally a few names will be mentioned) Resistance Level: Is the technique better utilized with heavy, moderate, or light weight. Rest: Suggested amount of rest during/between/after each technique. Explanation: How to utilize the technique.

Example: An example of the technique.

Resistance level and Rest are only suggestions! Changing or individualizing the techniques allows you to create your own technique and therefore add diversity to your workouts and astonish the muscles!

Giant Sets
A giant set usually consists of a number of different exercises for one particular body part done in tandem. Set one is preformed on one exercise followed by set one on the next exercise and so on. Weight is usually moderate and there is little to no rest between each exercise. After one set, rest can occur up to two to three minutes. Example: Triceps pushdowns – overhand grip, followed by triceps pushdowns – underhand grip, then dumbbell kickbacks. The total, composing one giant set.

Super Sets
A super set consists of a number of different exercises for two or more body parts one after the other. Body part number one is exercised, and then body part number two, etc. Weight is moderate to heavy with minimal rest between exercises. Rest between super sets is anywhere from two – five minutes. Example: Biceps and Triceps – alternating standing curls with triceps French curls.

Forced Reps
Forced reps are a process that involves working the muscle group to failure. Forced reps take place with in a given set and can consist of maximal weight to failure (less reps) or light to moderate weight (high reps). Utilization of a lifting partner is essential to allow full contraction of the muscle to occur. Minimal time is needed between forced reps (as long as full muscle contraction occurs) and time between sets utilizing forced reps is longer to allow greater recovery. Example: Bench press at 90% of max for 6 – 8 reps (employing a partner to help you through the full phase of contraction).

Twenty-ones
Twenty-ones is a descriptive term based on the number of reps done in a given set. The unique aspect of this method is that the set is actually broken up into three different sets done consecutively, within the same movement. The three different aspects of the set involve partial range of motions within a full range of motion (see example). Each aspect or portion of the full range of motion is done for a total of seven, followed by the next portion of the full movement for seven, and then finally by the last portion of the full movement, again for seven. (7 + 7 + 7 = 21!) Obviously you could do Fifteens (5+5+5=15) if you wanted to, but this technique is better known as Twenty-ones. The exercise is done using moderate weight. Each portion of the movement is done immediately after one another, with average rest between sets. Example: Standing Biceps Curls – do seven partial reps from the start point to midway, followed by seven partial reps midway to the end of the movement, then do seven full range of motion standing curls to end it.

Timed Sets/Reps
Timed sets and reps involve doing the movement through a specific fixed time or count. Both the concentric (positive or up) and the eccentric (negative or down) phase of the movement are done over a specified time or count. The positive and negative movement times can be the same or different, as long as they are consistent through out the entire set. Time between reps is minimal (one following the other), and rest between sets is moderate (2- 3 minutes). Weight is usually moderate to light, as the set is difficult. Example: Seated Quadriceps Extensions – Do the concentric or up movement over a 10 second count followed by the negative or down movement over a ten second count. Repeat.

Partial Reps, Restricted ROM sets/reps
Partial reps or restricted range of motion (ROM) sets is similar to Twenty-ones except that the entire set is purposefully done through a partial range of motion. Focus can be either on the concentric or eccentric portion of the partial movement. This can be done anywhere within the normal full range of motion such as at the beginning, the middle, or the end. Weight is usually moderate to heavy and timing between sets is anywhere from 30 seconds to two minutes. Example: Lying Hamstring Curls – a set of 12 reps is done at the top of the normal range of motion, starting from the hamstrings being fully contracted and ending approximately midway through the normal range of motion and repeating.

Pre-exhaustion, Reverse Training, Pre-lift burnout, etc.
Pre-exhaustion is a method in which a muscle group is isolated, using an isolating movement prior to doing a compound movement (more than one muscle being utilized, or more than one joint involved in an exercise). This method fatigues the muscle being refurbished before it is subjected to “the real” workout. Weight is light to moderate and reps are usually in the higher range. Example: For your chest – Doing cable crossovers (isolating movement), three sets of 20 reps, before doing bench press (compound movement).

Post-exhaustion sets, Heavy-light sets, Burnouts, etc.
Post-exhaustion sets involves performing low repetition, heavy weight sets, followed immediately by high repetition, light weight sets. This can be done with the same exercise (example #1) or with two different exercise (example #2). Weight is as described above, and there is minimal to no rest between the heavy and light phase of the set. Rest between sets is moderate to long, again, for recovery. Example #1: Squats – Heavy set doing 4 to 6 reps followed immediately by squats with a lighter weight, 12 – 15 reps. Example #2: Squats – Heavy set doing 4 – 6 reps followed by leg extensions, moderate weight, 12 – 15 reps.

Load pyramiding
Load pyramiding occurs when each progressive set is done with heavier weight and less repetitions. This can be done with minimal or moderate rest between sets. Example: Bench press with sets, reps, and weight as follows – Set 1- 100lbs 10 reps. Set 2- 120 lbs 8 reps, etc.

Repetition pyramiding
This form of pyramiding is done with a set amount of weight and gradually increase repetitions by one or two per set. Example: Set 1- 150lbs, 10reps. Set 2- 150lbs, 12 reps. Etc.

Intermission pyramiding
This techniques progressively decreases the time between sets of a given weight load. Example: Set 1- 120lbs, rest 1:00 minute. Set 2 – 120lbs, rest 30 seconds. Set 3 – 120lbs, rest 15 seconds. Pyramiding can also be done within a given set. These are also referred to as load sets (add sets) or drop sets (stripping, strip sets).

Load Sets
Load sets progressively add weight to a given set while the number of repetitions stays the same or decreases. Example: One set – 100lbs 10 reps, followed immediately by 120lbs 8 reps, etc.

Drop Sets
Drop sets involve decreasing the amount of weight while you decrease or keep the reps the same (each time to failure) with in the same set. Example: Self-descriptive.

In part II of Bodybuilding Techniques we will cover a number of other systems that, as was stated above, breaks monotony and allows for periods of growth by alternating tissue breakdown and tissue repair. Utilize these techniques not only as they are stated above but in ways that tailor to your needs. Change them up, add or decrease weight and/or reps. Use them with various body parts on different days, weeks, etc. Most importantly, go for your goals and don’t go to P.O.T.!

Dr. J. Warren Willey II, DO is a board certified Family Physician. His specialty interest is in preventative medicine and the use of exercise and nutrition in the treatment and prevention of disease. He graduated from the Mayo Clinic Graduate School of Medicine, with residency training in family medicine in 1999. Dr. Willey graduated Summa Cum Laude from The University of Health Sciences – College of Osteopathic Medicine in Kansas City, Missouri in 1996. He has a bachelors of science in exercise physiology from Colorado State University. He was a nationally competitive teen body builder and is currently starting to compete again. He is a patent holder on a number of fitness and medical devices. He has written textbooks and writes for a number of periodicals including Men*s Fitness. Dr. Willey has extensive knowledge of resistance training and exercise, and is currently working on a textbook for personal trainers, physical therapists, and physicians in the area of resistance and weight training. He also designs elite diet programs, nutritional strategies, and exercise routines for physic artist and bodybuilders. Dr. Willey is available for consultation and can be contacted at: docjww@hotmail.com

Newer Post
How Much Can You Bench Press?
Older Post
How to Reveal Your ”Six-Pack” of Abs!