Fat cells – also known as adipocytes – are like fuel tanks where you store energy for future use. Fat cells also function as endocrine glands, secreting hormones and adipocytokines that communicate with your brain and other cells in your body.An infant usually has about 5-6 billion fat cells. This number increases during early childhood and puberty, and a healthy adult with normal body composition has about 25 to 30 billion fat cells. 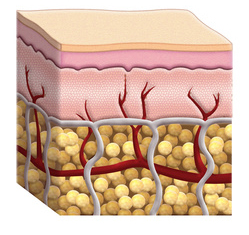 A typical overweight adult has around 75 billion fat cells. In the case of severe obesity, fat cells can number as high as 250 to 300 billion.

The average weight of an adult fat cell is about 0.6 micrograms, but they can vary in size from 0.2 micrograms to 0.9 micrograms. An overweight person’s fat cells can be three times larger than a person with ideal body composition.

Not all fat cells are the same.

Over the past decade or so, an enormous amount of research has emerged revealing that where you store your fat is an important predictor of metabolic and cardiovascular risk.

Carrying large amounts of excess body fat is unhealthy in general, but the abdominal and visceral fat increases the risk of cardiovascular and metabolic disease the most. Lower body fat, while it’s an annoying cosmetic problem, is relatively harmless and may even have a protective effect.

New research published in the October 2010 issue of the Proceedings of the National Academy of the Sciences recently made headlines when it confirmed the previous findings about body fat distribution and health risk. But in this study, there was a new twist…

We’ve known for some time that fat cells could multiply, but it has been widely believed that fat cells could only increase in number under certain circumstances such as extreme weight gain or at certain times in a person’s life-cycle, such as during pregnancy and during late childhood and early puberty.

This new study has demonstrated that different body fat depots have distinct properties with regards to how they grow and multiply.

“The cellular mechanisms are different,” said study author Michael Jenson, an endocrinologist at the Mayo Clinic. “The accumulation of abdominal fat happens largely by individual cells expanding in size, while the fat gain in the femoral or lower body it’s the number of fat cells that increases.”

What’s alarming is how quickly and easily lower body fat cells were formed with weight gain. As Jenson and colleagues reported:

“We found that a gain of only approximately 1.6 kilograms of lower body fat resulted in the creation of 2.6 billion new adipocytes in just 8 weeks.”

“Adipose tissue is highly plastic and can respond rapidly to changes in nutrient intake through fat cell hypertrophy or hyperplasia, depending on the fat depot and fat cell size,” added Jensen. “Increases in femoral adipose tissue mass can occur remarkably quickly through formation of new fat cells.”

Abdominal fat cells CAN multiply, but it usually only happens in adults when there is prolonged, extensive weight gain. Not so with lower body fat.

This study made mainstream news with headlines such as “Fat thighs better for you than fat bellies” or “Big Bellies vs Thunder Thighs: Which is Unhealthier?” But we already knew how upper and lower body affects your health differently. What had never been directly confirmed before is the fact that lower body fat accumulates through fat cell multiplication.

This latest info on fat cells has implications not only for health but also for how you approach dieting for fat loss and muscle gain.

When aiming for lower-than normal body fat levels, as in figure or bodybuilding competition, it’s normal to have an in-season and off-season fluctuation in body fat. For example, a male physique athlete might maintain a 9-11% body fat level all year round and cut down to 4-5% for competition.

That’s not extreme, it’s not yo-yo dieting nor is it bulking – that’s going from already lean to ripped and then back to lean. There is little risk of creating new fat cells in this situation since your fat cells are small at these levels of body fat.

Several studies, including the present one, show that when adipocytes increase to a critical volume, they secrete substances that recruit new adipocytes (from pre-adipocytes).

That tells us that if your body fat is high (when fat cells are already “full”), and you gain even more fat, the risk of creating new fat cells is higher.

It also helps us answer the question of “should I focus on gaining muscle or cutting body fat first?”

If your body fat is above the average range, then you should focus on fat loss first before thinking about gaining muscle mass. In the Holy Grail Body Transformation Program, I define that range as approximately 15-19% body fat for men and 21-25% body fat for women.

This also tells us that if you’re already lean, you should avoid allowing your body fat to rise above the lean to average range. This is true for both unintentional weight cycling as well as intentional attempts at gaining muscle by bulking up.

Crash dieting often leads to rebound weight gain. By going from overweight to lean to overweight again, you could be creating new fat cells with each yo-yo diet cycle.

The reverse is true as well: many body builders or underweight people think they simply need to eat everything in sight and as long as they’re weight training, the surplus calories will turn to pure muscle. What usually happens instead is that body fat is gained along with the muscle. Unbeknownst to them, they’ve also created new fat cells, not just bigger fat cells.

If your body fat creeps up to the threshold of leaving the “lean” category, you need to nip it in the bud fast.

This is more evidence that you should avoid gaining or re-gaining large amounts of excess body fat – especially people prone to store fat in the lower body and especially women.

It’s also further proof that the old bulking approach is obsolete. The optimal approach is to gain muscle slowly to ensure as little fat gain as possible. With the latest advances in cyclical dieting techniques, it’s even possible to achieve “The Holy Grail” of fitness goals: gain muscle and lose fat at the same time over the course of one phase or season.