As discussed last weekin Part I, Leptin is a hormone produced when the OB (obesity) gene is expressed. While I’ve already discussed one mechanism to induce OB gene expression and Leptin production, the three main cellular signals involved are… • Increased energy/carbohydrate flux through the HBP.
• Increased triacylglycerol (triglyceride) metabolites. These include diacylglycerols and/or free fatty acids.
• Increased tension in adipose tissue due to cellular stretching (increases in adipose size).

As you can see, these three phenomena provide response mechanisms whereby both acute and chronic overfeeding or underfeeding will influence OB gene expression and Leptin production. If overfeeding, more carbohydrates will flux through HBP, more triglycerides will be metabolized, and adipose tissue sizes will increase. This leads to more Leptin production. Conversely, if underfeeding, carbohydrate and triglyceride availability will be decreased, as will adipose tissue size. Of course, this means less Leptin.

Since we now know why Leptin is formed, how about discussing where it’s formed? In adult humans, most of the body’s leptin is formed in white adipose tissue. This should be self-evident from the signals discussed above. However, Leptin has also been found in the following tissues, making it relatively ubiquitous.

Of Rat and Fat

When Leptin was originally discovered, scientists found that rats that had mutations in the OB gene (and couldn’t produce Leptin) became insanely obese. Now when I say obese, I’m not talking a little overweight here. I’m talking so obese that members of NAAFA actually pointed and laughed. In the obese rats, the extreme obesity was caused by mutations in the Ob gene. In these animals, there was simply too little Leptin. Interestingly, when administered Leptin, these tubby rats saw big increases in metabolic rate and lost massive amounts of body fat.

As a result of these findings, researchers speculated that Leptin might be a magical fat loss hormone. Unfortunately for the pharmaceutical companies who immediately jumped all over the rights to sell recombinant Leptin, this hypothesis didn’t pan out. You see, another model of rat was discovered, a model that was as obese as the Leptin deficient rats but had adequate Leptin concentrations in the blood. These rats, instead of a Leptin deficiency, had problems with their Leptin receptor. Therefore the Leptin that was present couldn’t do its job.

In addition to this new rodent data, thwarting the potential billions to be gained from Leptin sales, new human data also showed that Leptin was unlikely to help the obese drop those few hundred unwanted pounds. Research had clearly demonstrated that:

Since obese humans often have so much Leptin, research has been directed toward how these individuals can have so much Leptin, yet fail to respond with a reduction in body weight, as did our furry rodent friends. One hypothesis that has gained popularity suggests that a Leptin resistance causes human obesity. In other words, the very obese got this way because they were somehow intolerant to rising Leptin. As one researcher put it, "Leptin resistance is not well defined, however this term is usually used to mean that leptin does not perform its central and peripheral functions."

At this point, there is some evidence for the Leptin resistance hypothesis. Since Leptin seems to have central effects, the saturable blood brain barrier transport system for leptin may be linked to obesity. Since obese humans have a CSF (cerebrospinal fluid) to plasma ratio that is much lower than normal-sized humans, it appears that only so much Leptin can get across the BBB into the brain. In addition, in rats, dietary induced obesity (DIO) is accompanied by high plasma leptin concentrations. This leptin doesn’t seem to prevent the obesity. However, when administered intracerebroventricular leptin (leptin into the brain), they lose weight, indicating a potential BBB transport limit.

Although these data offer support to the idea that there is a limit to amount of leptin allowed into the brain and therefore a type of Leptin "resistance" exists at the higher levels of Leptin production, some authors believe that leptin resistance is actually a misnomer. These researchers are of the opinion that since leptin may not be designed to function in such high concentrations as seen in obesity, Leptin may be more important in its absence than its presence (i.e. may be more important in calorie restriction and not in calorie excess, as is often seen with obesity). In other words, it’s not that the obese are "improperly" responding to their leptin. Instead, these authors are suggesting that the obese aren’t "supposed" to have so much leptin and therefore don’t respond to it’s elevation above a certain point.

The hormone Leptin seems to affect nearly every system of the body. Since there are Leptin receptors in the brain and throughout the body, we can discuss the effects of Leptin as central or peripheral.

Since Leptin is released (mostly) by adipose tissues, adipose tissue seems to be a peripheral static indicator of the chronic energy balance of the body. Once released into the blood, under normal conditions, Leptin travels across the blood brain barrier and is sensed by the Leptin receptors in the hypothalamus. Since these receptors have some idea of what’s a "normal" Leptin signal, changes in Leptin binding initiates the release of a series of anabolic (orexigenic or meal stimulating) and catabolic (anorexigenic or meal preventing) hormones/neurotransmitters. An increase in leptin leads to the expression of several anorexigenic (catabolic) hormones and neurotransmitters including áMSH and CART. These chemicals decrease hunger and meal size.

Conversely, a decrease in leptin leads to the expression of several orexigenic (anabolic) hormones and neurotransmitters including NPY and AgRP. These compounds increase hunger and meal size. This is a rather nice way for the body to deal with energy surplus or energy deficit. If there’s a surplus, Leptin increases, signaling the hypothalamus to tell the body to stop eating. Conversely, if there’s a deficit, Leptin decreases, signaling the hypothalamus to make us really hungry. For you visual learners, here’s a visual depiction of what happens when Leptin concentrations increase in the hypothalamus. 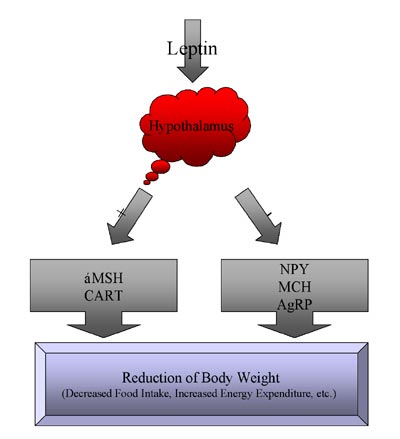 Although I only mentioned a couple key orexigenic and anorexigenic hormones/neurotransmitters, there are many others that can interact with Leptin or the same signaling systems as Leptin. These are listed below:

While these energy regulating hormones and neurotransmitters may be relatively new to you, the important message here is that they are responsible for sensing a starvation response (with decreased Leptin). In response to these decreases in Leptin concentrations, these chemicals are responsible for promoting the following effects:

Conversely, these energy regulating hormones and neurotransmitters are responsible for sensing an energy surplus (with increased Leptin). Therefore, when Leptin concentrations increase, the following effects are promoted:

Again, for you visual kids, here’s a schematic. Remember, Leptin is regulated in response to acute feeding as well as chronic energy balance (as measured by adipose mass). Therefore, while you’ll see weight gain and weight loss as regulators below, you could replace these terms with underfeeding and overfeeding. 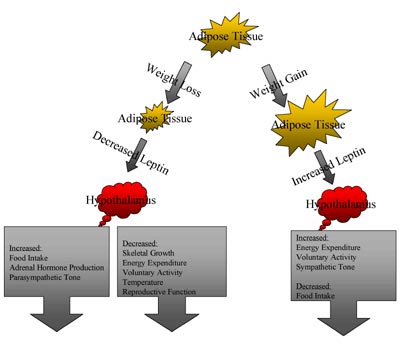 • Leptin may act in concert with the immune system since leptin deficient animals have reduced immunity. This may explain part of the effect of dieting on weakened immune function.

• The paradox of this relationship is that leptin is partly responsible for increasing GnRH secretion as well as LH, FSH, and Testosterone secretion. Therefore, at very low concentrations there would be an occurrence of hypogonadism. But very high concentrations, Leptin directly inhibits Testosterone release (leptin decreases T secretion from testis, even in spite of increased GnRH activity), again causing hypogonadism. Therefore the best Leptin concentrations would be at the low normal range. Not coincidentally, this usually occurs in those lean individuals who are well fed.

In addition to these peripheral effects, Leptin has shown the following interactions with other hormones:

The following adipocytokines (hormones released from adipose) may also interact with leptin:

What’s that sound? Oh, that’s the bell! Quickly I’d like to recap this week’s lesson. First of all, Leptin is released from many peripheral tissues but the biggest player is white adipose. Once released, Leptin has all kinds of divergent effects on the peripheral systems of the body, many of which are just coming to light. These peripheral effects include interactions with many hormones of the body as well as interactions with the skeletal muscle, the immune system, and the reproductive system. Also, Leptin acts centrally in order to stir up a neurotransmitter soup of meal stimulating and meal reducing chemicals. These central and peripheral effects are important to understand as they are ultimately responsible for metabolic changes with feeding as well as weight gain and loss.

So class is now dismissed for this week. But don’t miss out on next week’s lecture. I’ll be reviewing some of the important feeding studies and discussing some recent data showing how recombinant Leptin injections may actually help prevent the metabolic decline associated with dieting.

Of course, if you want a complete guide to doing this yourself, I strongly recommend you pick up a copy of Precision Nutrition, where I’ll show you in great detail exactly what to do.