Newer PostBODYBUILDING.COM Is Conducting a Voluntary Recall of 65 Dietary Supplements
Older PostIs Junk Food as Addictive as Heroin?
Share on FacebookShare on TwitterShare on LinkedinShare on Pinterest This scam has also been running rampant for Resveratrol products, Colon Cleanse products, Wrinkle “Cures”, Men’s muscle building supplements, and anything else that claims to give you miraculous results from a bogus little pill… and if they tell you that you get 1 free bottle for only paying shipping and handling… get off that site FAST!I found out that even my own mom had recently fallen for this type of scam, so please read how this works and pass on to your friends to protect them from falling for this too.

Over the course of the last year, you may have noticed that you couldn’t go to any website on the entire internet it seems without seeing about 10 ads saying things like this:

1 Rule of a Flat Stomach – Obey

3 Rules of a Flat Stomach – You Must Obey

Here are some similar ads that have been EVERYWHERE lately:

Here’s the deal on how this scam works:

If you’ve ever clicked on one of these ads, the first thing you’ll notice is that this so-called “1 Rule” or “2 Rules” doesn’t even exist. Instead you end up at what looks like a blog (or so they’re trying to fool you into thinking it’s a real blog)…

FYI – this same exact fake blog scam is being used in all sorts of categories online now from teeth whiteners (ever seen the stupid “Cathy’s Teeth” ads everywhere?) to men’s muscle-building supplements to dozens of other products (which is why I’m showing you how the scammer usually works this whole operation).

These “blogs” usually show a picture of a woman with some made-up name such as Heathers Fat Loss Blog or Kristin’s Diet Blog or Jennifers Weight Loss Blog. However, the problem is that Jennifer or Heather or Kristin all don’t even exist! To be honest, they could easily be some big fat hairy guy sitting in his boxers on his couch operating this fake blog that is trying to sell you bogus pills.

The pictures of the women used in these blogs are usually simply obtained by the scammer from stock photo websites… and then they manipulate some photos to try to look like a person made some sort of transformation. Many of the pics only show from the chest down, so they aren’t even the same person in before and after pics.

Here’s an example of the types of fake pictures they use on these blogs: 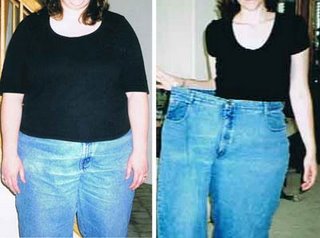 Wow, Cindy Smith from Atlanta, GA also lost 58 lbs in only 17 days using her free bottles of acai berry and colon cleanser… damn, she looks a lot like Mary Jones from California… maybe they are just twins, and what a coincidence that they both used free bottles of pills to lose all that weight at the same time… hmmm.

The entire blog is fake, including the so-called “comments” that are at the bottom of the blog (which the affiliate marketer is clever enough to put some comments in all-caps and some in all-lowercase, so they look like legit comments from different people).

Scam Characteristic #4: they somehow live near you???

Another thing that the scammer does is their site detects your IP address location, so that they can fill in a city near you to make you think that Heather or Kristin or Jennifer are located somewhat close to where you live… That’s why if you live near Chicago, it’ll say that it’s Cindy’s Blog and she’s a mother of 2 that lives near Chicago… maybe they think this gives you the “warm fuzzy” trusting feeling that they must be a local person.

Scam Characteristic #5: they usually claim some sort of celebrity endorsement, such as Oprah, Dr Oz, or Rachel Ray

Almost all of these fake blogs usually show pictures of either Oprah, Dr Oz, or Rachel Ray (or some other celebrity) and claim that they are endorsed by that celebrity. First of all, even if a celebrity did endorse a pill, who cares? Does anybody really think most celebrities are weight loss experts? Give me a break!

And 2nd of all, most of these celebrities have come out publicly and stated that they don’t endorse these products… so again, this immoral fake blog owner is simply lying.

Sometimes they will promote a different product such as resveratrol or some sort of other “miracle fat burning pill”. It doesn’t matter what combination they claimed they used… they’re all complete scams!

The reason they claim that they used 2 products is because they get 2 commissions from the supplement companies if you are fooled into buying both of their “free bottles” (which you’ll eventually see aren’t really free when they send you the 2nd round of bottles in 3-4 weeks and you get billed $90 on your credit card for EACH bottle).

Scam Characteristic #7: they say the offer expires at a date that is either 1 or 2 days from current date

Many times the fake blog will also say that the offer for these “free bottles” of pills expires (and it gives a date that is either 1 or 2 days from the current date). They do this through a script that simply fills in the date at a set time after today’s date. Again, they are lying.

The backbone of this whole thing lies in something called a CPA network, where independent online advertisers are allowed to do whatever they want to try and sell a bottle of pills to someone using a “get this free bottle of pills and pay only shipping and handling” type of offer… and these CPA affiliates will do ANYTHING to try to lure you into this sale — and that includes blatantly LYING in BOTH their ads and their fake blogs!

Now these CPA networks aren’t necessarily the bad apples (although I’ve heard that some reps from the CPA networks have actually tried to convince their affiliates to produce fake blogs)… it’s the CPA affiliate marketers that run most of the advertising for the products that the CPA networks allow. Those are the real low-lives with no morals that will do anything to make a buck.

From what I’ve seen, these CPA network affiliate marketers that run “magic pill” offers will do whatever it takes to make a sale… they literally seem sleezy enough that they would probably even lie to their own Mom just to make a sale. The CPA network pays the affiliate a set hefty fee everytime someone orders a “free plus S&H” bottle of pills.

But it gets worse!

Now beyond that fact that they already blatantly lied to you by using a fake blog, fake story, and about 10 other lies… most customers do not see the fine print that tells them that they’ll start receiving bottles of this junk every month starting about 3-4 weeks after their initial order for the “free bottle + shipping”.

This same exact thing happened to my mom when she told me about the “free bottle” of pills she found on the internet. I asked her what the site looked like that she saw this on and she described exactly the type of fake blog that I’m telling you about in this article. She literally had no clue that she was going to be billed another $70 to $90 per bottle on her credit card in a couple weeks when they automatically started sending her the next month’s shipment.

Now to give some of these companies a little bit of credit… if you read the fine print, they do say that you’ll get automatically billed, but from what I’ve heard is that most people don’t read the fine print and really have no clue that they will be billed again. Most people really do think that they are getting a free bottle of pills for only S&H.

And if you ordered both bottles of pills from the fake blogger’s so-called “2-step process”, then you’ll be shocked to see 2 giant charges on your credit card next month when they send you the 2nd set of bottles.

To make matters worse, I’ve heard from people that some of these shady “fly by night” supplement companies are poorly staffed and it’s nearly impossible to get in contact with them to cancel your order or get a refund. Good luck with that!

And the Last Problem – the pills don’t work!

That’s right…they don’t do jack-diddly-squat! I’ve even heard from some insiders that these sleezy companies produce these bottles of pills for about $1.50 per bottle, and then charge you $70 or $80 per month for them!

Remember that ever since the passing of the 1994 Dietary Supplement and Health Education Act (DSHEA), supplements have been excluded from federal regulation. One of the negative aspects of this is that certain unscrupulous companies could now pretty much get away with putting anything they wanted in the bottle because it did not have to undergo quality control testing to make it to market. Their label didn’t even have to match what was in the bottle, since nobody is policing them.

As shady as these companies are, I certainly wouldn’t trust them to actually be truthful in what they’re putting in the pills… how do you know it’s not just sawdust in the pill?

Watch out for this Idiot Loser too…

Also watch out for a particular fake blog scam that I just saw showing up recently called the “Terminator Workout”. This fake blog is designed to deceive men into buying a “free bottle” of muscle building pills. This idiot that made the fake blog claims you don’t even need any exercise at all. sure… ok Tiny Tim.

Also his ads don’t even make any sense, since the Terminator Workout ad takes you to a fake blog that doesn’t even talk about working out… he just talks about the pills. He tries to talk in a real casual and “urban tone” on the blog too to fool you into thinking he’s a regular guy that found a miracle supplement. What an idiot loser!

Watch out for these slimeballs and their fake blogs… they’re everywhere!

Instead of falling for scams, get the real TRUTH on losing body fat permanently without any bogus pills.